I thought I would show you some of the envelopes that go back and forth between Vince and me. First, here is the standard return address on a letter from him. Just in case I’ve managed to keep his incarceration private from a few people, the DOC makes sure that the US Postal Service and my fellow neighbors in my apartment building know he’s in prison. 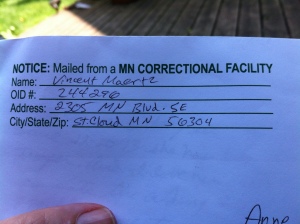 I know, I know. I could be a battered woman who wants nothing to do with her abuser, who is locked away in Moose Lake. It just seems like most people are suspicious enough that they would see a letter from someone they don’t want to hear from, a mile off, without the use of MN CORRECTIONAL FACILITY. I mean really—all caps? Who uses those anymore unless they are angry?

On the positive side, here is the standard postcard they send. I like the tree, nice touch.

Here is a sample of a letter that was returned to me. Why? Because I used a return address sticker, apparently.

Again, I understand that every one of these “rules”—I use quotation marks because they are enforced inconsistently—probably originated from some incident. In this case, the myth is that someone tried to send the offender LSD using address stickers. Apparently you might try to send LSD in lipstick, perfume, bubble wrap, white out, or even create a fake stain. It’s true that a lot of criminals are pretty imaginative.

Imaginative, but dumb. If you wanted to get high in prison, and I can understand why you would, would you really want to go on an acid trip? I’ve never dropped acid. If I were going to, I’d want to be in a lovely cottage in the countryside somewhere, where I could safely ponder bunnies and fawns.

Tripping in a prison cell? That’s one of the ways our clients where I work have been tortured. They’re shackled to a bed, forced to ingest acid, then tormented in an endless variety of ways.