When Vince and I started blogging, I didn’t realize that a theme of redemption would emerge. Vince is transformation is probably obvious. Mine is subtler and has unfolded over many years.

I have been thinking about this lately because in the spring and sumer I get dozens of emails a day from the Humane Society about stray kittens. What does this have to do with redemption?

I signed up to do foster care of kittens a couple years ago. These kittens are born in warehouses or barns or even under car hoods. The mothers, if they survive, are emaciated and barely old enough to conceive. So that’s part of what makes fostering redemptive for me—giving care to vulnerable teen moms that I didn’t receive myself.

I keep these kittens, with or without moms, until they are old enough to be spayed/neutered, then turn them back to the Humane Society. It’s not all fun; I’ve had entire litters die because the mother was so dehydrated. Kittens have been smothered by their litter mates. One lost an eye to the claws of a litter mate. So it’s kind of a nature-tooth-and-claw experience.

People wonder how I don’t get so attached to them that I want to keep them. I think fostering is the ideal set up—I get the cuteness of kittens and the Humane Society pays all the vet bills and provides the supplies. I travel too much to have a permanent pet. When I turn them back in, I know they will be adopted immediately—there’s a huge demand for kittens. And I’m not even that much of a pet person.

So why do I do it, and what does it have to do with redemption? I think it goes back to one of the few memories I have of my dad.

A few weeks before he left home forever, he had been gone for weeks and showed up with a black kitten. I must have been seven, and my three younger siblings were thrilled. I was too, but also leery because I knew my mother was not thrilled. I can see now that the kitten was my dad’s wedge to get back in—if my mother had demanded he turn around and leave, “and take the darn kitten with you,” she would have been the bad guy.

I remember dad telling us to hold her gently and not fight over her because she was a living creature with feelings. He said her name was Surprise! and told us to always say it that way, like there was an exclamation point.

So then dad was back home, and the next day he went out to buy some cat food and kitty litter. He was gone all afternoon and missed dinner. My mom tried to put us to bed early. We did what we usually did, laughed at her and ran in four different directions. But I also can still feel how anxious we all were.

Dad made his appearance just as the cat had crapped under someone’s bed. My mom began to reproach him because of course he was drunk and hadn’t brought home any pet supplies.

We kids were giggling until dad roared, “I’ll Get that goddamn cat!” He ripped the kitten out of my sister’s hands, strode to the top of the stairs, and hurled her down the staircase like a fast ball, screaming, “You goddamn piece of shit!” He raced down to the landing, grabbed Surprise before she could get oriented, and sent her hurtling down the second set of stairs to the first floor.

All of us—my mom and the four of us kids—huddled at the top of the stairs. Someone was whimpering but I had learned to be silent, no matter how frightened I was.

That’s when I had the thought that would teach me to never make wishes:

A few months later, he was.

Surprise! not only survived but had a litter of eight black kittens six months later.

Much later, there was a (nonviolent) incident involving cats and Vince but that’s his story.

Who could not feel their soul restored by kittens? 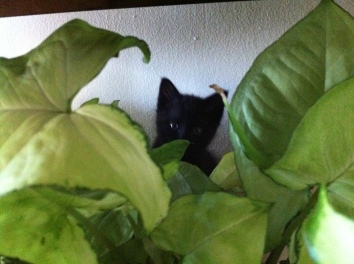