Today is Independence Day in America, or what we popularly call “the 4th of July.” I thought I would write something profound about freedom and democracy and human rights and the intersections of race and class, but instead I am too busy to write much because I am fighting off a flea infestation in my new home.

The day after I wrote that maudlin post about kittens, the Humane Society was sending email after email about kittens that needed fostering, so I raised my hand to take a trio of month-old motherless kittens. Oh they were so cute, so cuddly, I helf them in my lap for hours.

I spent the next few days and nights scratching myself and waking up at 3am exclaiming, “ouch!” I won’t go into detail but let’s just say that fleas like the warmest parts of the body.

I spent yesterday at a doc in a box, then went to a different pharmacy from my regular one to fill the prescription.

Then I returned the kittens to the Humane Society. They were very apologetic. This is the biggest year for kittens in anyone’s memory, so they screwed up and sent a litter out without flea-bombing them, or whatever it’s called.

“And if they ingested any fleas, then they have tapeworms, too,” the vet tech said sadly. I can only imagine the look on my face, because she started repeating, “I’m so sorry!”

Fleas are a nuisance and make you feel like a hillbilly, but I draw the line at worms. I find worms of any kind horrifying. Guinea Worm, a disease found in Africa, would be my worst nightmare. I won’t provide a link because I know images would pop up. Tapeworms would be a close runner up for horrifying conditions.

“Does that hold for humans, to?” I asked. “If I accidentally ingested a flea could I have tapeworms?”

If there are any public health veterinarians reading this, will you please let me know if I should be worried?

On the bright side, it’s not bed bugs, which was my first fear. Apparently they are almost impossible to get rid of.

You get rid of fleas by poisoning them, heating or freezing them to death, suffocating them, or vacuuming them up. So I have spent my 4th of July holiday washing every fabric item I own, vacuuming, stuffing things into airtight plastic bags, stuffing my freezer full of pillows. I am coated with Permethrin cream from head to toe.

Here’s a photo of the little buggers when I dropped them off. 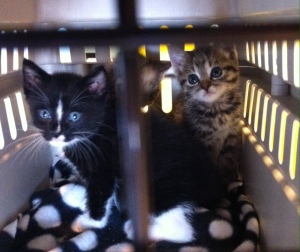