Is this Islamaphobia? Well sure it is, with some people, but not for most.

I think it has a lot more to do with familiarity, in two ways.

First, in 2014 there were 16 terrorist attacks in Lebanon. 16! So far in 2015 there have “only” been seven. I looked it up on that great scholarly source, Wikipedia, because I had been thinking, “Bombings happen all the time in Lebanon” and I wanted to make sure I wasn’t just imagining that. I wasn’t.

In 2014 there were three terror attacks in France, all carried out by lone extremists, and one person died. So the attacks that came in January were the launch of a new era.

I’m not saying, “So what?” about terror attacks in Lebanon. I’m just saying that the frequency of them numbs us to the point where we might roll our eyes and shake our heads and maybe think for 10 seconds, “Those poor people. What a terrible way to live.” But we don’t change our Facebook photos.

Then there’s the other aspect of familiarity: Many westerners (North Americans, Europeans, Aussies, and Kiwis) have been to Paris. We may have studied French in high school or college. We’ve certainly seen Paris, and France, in films and TV shows and heard it referenced in music. How many westerners have been to Beirut? Studied Arabic? Can you name one movie set in Lebanon?

So my point is, empathy is about being able to imagine yourself in someone else’s situation. Even if we’ve never been to Paris, we have seen it so many hundreds of times that we feel it’s familiar, and it’s easier to imagine ourselves in that MacDonald’s where one of the terrorists blew himself up.

I went to the Middle East for work earlier this year. I was fortunate to be able to take some extra time to visit Petra, a 2,000-year-old city built by a people called the Nabateans who have since vanished from history. I hiked, bullshitted with the Bedouin guides, and savored the astonishing beauty of the place and the silence—so rare in our world. 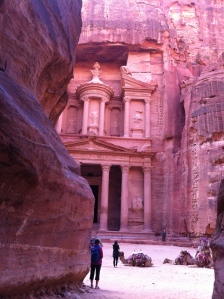 A few months later, ISIS starting destroying ancient sites in Syria and Iraq, most notably Palmyra. Palmyra was built thousands of years before Petra and had similarly stunning structures.

A year ago, I might have rolled my eyes and shaken my head and thought, “That’s terrible,” then gone on my way. But now I felt sick to my stomach and I couldn’t get it out of my mind.

So having been to a very similar place, I got it. I got it on a visceral level what a loss to our world the destruction of Palmyra was and I started worrying that ISIS might get to Petra eventually.  Stone buildings aren’t people, but you know what I mean.

Travel creates empathy. Not always, but often. Ironically, the attacks in Paris will probably cause people to stay home or travel only to the safe, sanitized foreign destinations like all-inclusive resorts in Cancun and Ibiza.

2 thoughts on “Being There”