This is the third of three posts, the first and second are here. If you started reading this blog for the prison theme you may be wondering, what does any of this have to do with Vince going to prison? I don’t know if it does—you tell me.

And so I informed people of my decision, which I had known from the moment I’d found out I was pregnant again: I would give the baby up for adoption.

I told Judy, the Catholic Charities social worker, and her eyes lighted up. “I do have a few reservations,” I told her about what I had learned about adopted people in my Abnormal Psychology class. Judy laughed lightly and handed me a clipboard with forms. While I was signing them she said, “We have to trust that God knows what’s best for us. Even if it’s painful—especially if it’s painful, we just have to put ourselves in God’s loving hands.” I thought this was muddled but made a mental note to try to pray in my spare time.

I told my college advisor. “My due date is right before finals but I promise there won’t be any interruptions in my attendance.” She looked a little stunned and said, “We’ll understand if you need to take some time off.”

“No, no—that won’t be necessary,” I cut her off. I didn’t want them to cut me any slack. I would graduate on time. The whole point of this plan was to do what was best for all three of us, so I needed to graduate and get a job.

The other point of the plan was to keep it all hush-hush. I would stay away from the family, my friends, and the whole neighborhood where they all lived. If my grandma called and asked if she could visit me, I would make an excuse to keep her away. It would only be for six months, right? It wasn’t as extreme as the case of Margie, a girl I knew in high school, who went through her whole pregnancy and adoption while living in her family’s house. None of them ever talked about it. Now that was weird.

So there Vince and I sat, alone, on his first birthday. I had called The Creep and invited him but he had “some really important business” to take care of. In other words, a drug deal. I only saw him once again in the ensuing 36 years. 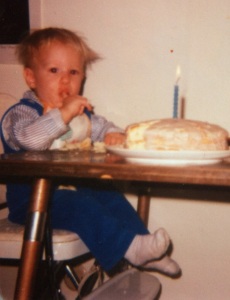 I did what you’re supposed to do for a baby’s first birthday. I made a cake with one candle and let him eat it with his fingers and smear it all over the place. And I cried…and cried.

Then I stiffened myself and plunged my feelings way down into the deep freeze and didn’t feel anything again for a year. That’s the thing about avoiding negative feelings—it makes you unable to experience positive ones, either.

Life went on as before. I trudged through the snow to the daycare, studied furiously, and cleaned the house as though I was in boot camp. As happened during my first pregnancy, perverts tried to pick me up at the bus stop, in stores, in the elevator of my building.

The student who had pressured me to have an abortion was disappointed when I told him I was going the adoption route. “That’s…I’m sorry, but that’s just selfish,” he said. “That poor kid,” he said, staring at my belly.

Sometimes students I didn’t know would try to strike up a conversation.

“When’s your baby due?” they would ask brightly.

“April,” I would respond flatly, giving them fair warning that proceeding with the conversation would be a mistake.

“I don’t really care, since I’m giving it up for adoption.”

This would result in sputtering and something like, “You’re so brave—good luck!” as they backed their way out of the room as fast as possible. I hated that line—“You’re so brave.”

Now that I had set my course I didn’t second guess it, but if you had asked me I might have said I was just being practical.