This is the seventh post in a series about Cuba that starts here.

Before we left Santiago de Cuba, we took an excursion to the nearby Parque Nacional de Gran Peidra—a sort of national park. I love the outdoors and got excited that we might go on a hike, but we only skirted the park on our way to our real destination, Guantanamo Bay.

If you look at Google maps, it’s really confusing. What you would think was the U.S. territory with the detention center is marked as Cuban territory. Google has steered me wrong before, mostly memorably in Nairobi where it sent me to a slum instead of to the Ford Foundation’s offices, so I would never count on it except for a rough approximation. 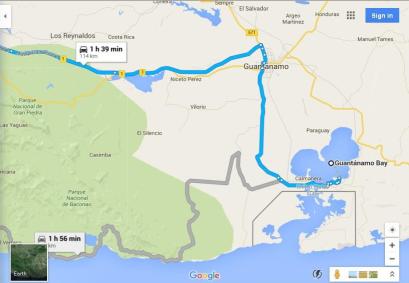 There was excitement on the bus as we got closer to Guantanamo. “Get out your OFAC letter!” someone exclaimed. “We’re being tailed by the CIA!”

As I mentioned previously, we were required to carry letters from the U.S. Office of Foreign Assets Control at all times to show we were there legally. I couldn’t imagine we would get anywhere near Gitmo—you didn’t have to see it to know it would be surrounded by 20-foot razor-wire fences and heavily-armed guards. What were we going to do, ram the gate? That would put a crimp in my plans to apply for jobs with the CIA and the Foreign Service!

But then the bus stopped, and most of us waited while a couple of Interfaith Task Forcers got off and held an animated conversation with the driver and our guide. Then we turned around and went back to Santiago. I will never know how the leaders of the Task Force talked our guide and the Cuban bus driver into driving to Guantanamo Bay, or how close we really got, or exactly where its limits are.

That’s the thing about travel, if you’re doing it right. You’ll come home shaking your head and laughing to yourself because there was some mysterious situation for which you’ll never have an explanation. That’s assuming no one got hurt or arrested, of course.

Now that I am working for the Center for Victims of Torture, it would be hugely prestigious to be able to say casually, “I was arrested at Guantanamo a couple years ago.”

CVT has been active in advocating for the closure of Guantanamo. First—obviously—because we, torture people there (yes, we, if you’re an American). Half the American population (and I think we can guess who their presidential candidates are) believe there’s nothing wrong with torture. “How we gonna catch the bad guys if we don’t torture people, huh?”

I could write 10 posts about why that’s a dumb statement, but for now I’ll just say, if you think torture is okay, go read someone else’s blog. And even if I thought it was okay, it’s still illegal.

The Universal Declaration of Human Rights, which came about in response to the WWII and specifically the Holocaust, outlawed torture. Ronald Reagan signed the international Convention Against Torture in 1984. President Obama issued an executive order on his second day in office banning torture. In November last year, Congress passed the National Defense Authorization Act, which “placed all U.S. government interrogations under the United States Army Field Manual on Interrogations, and requires that the International Committee of the Red Cross have prompt access to all prisoners in United States’ custody.” In other words, there are grownups in charge now.

Very few people know everything that’s gone on at Gitmo, but we do know that people have been detained indefinitely, without charge or trial. If you imagine yourself in one of those prisoner’s paper slippers, you will understand why they go on hunger strikes. We then subject them to another form of torture, forced feeding. If you wonder, “how bad could that be?” watch this video of the rapper Mos Def being force fed; he volunteered to show us what it really involves.

Back in Santiago, none of this was on my mind. My biggest concern was finishing my master’s and getting a job. Vince’s time in prison, and researching prison for this blog, changed all that.