Today is my last day housesitting for my friend. It’s been two glorious weeks of having a place to myself. It isn’t that Vince is a terrible roommate. The timing has worked out well, because Vince has been on lockdown for the whole time, meaning he cannot leave the house except for work and a couple AA meetings. I hope he has enjoyed having the place to himself; I think I get on his nerves.

My friend is a psychotherapist and her husband is a retired computer-something from the university. So they’re middle class but combined they can afford this four-bedroom house in the most sought-after neighborhood of St. Paul, St. Anthony Park. The house has at least twice as much space as my condo, and it’s got 25 windows vs. eight in my place, so it’s flooded with light. That means a lot during a Minnesota winter. I could never, ever afford to buy a house like it on my own, so I’m enjoying it while I can.

St. Anthony Park is near the university’s very large St. Paul campus, which is focused on agriculture, so there are lots of open fields—probably sown with GMO crops—but they look pretty even in the winter. And there’s a great collection of mid-Century modern homes nearby, so I’ve been enjoying walks among them. 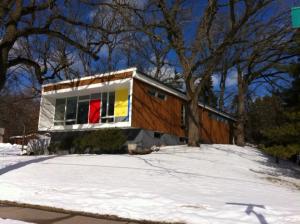 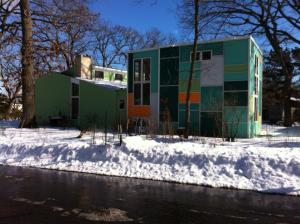 Another reason I’m enjoying this stint in St. Anthony is that I just like change, in general. I like having to travel a different route to the gym, cooking in a new kitchen, perusing other people’s bookshelves, and even just figuring out how to use unfamiliar appliances.

My commute to work from the condo isn’t long—15-20 minutes—but this house is only 5 minutes away, so I’ve been a happy commuter for two weeks.

Those are the obvious reasons I am enjoying my house sitting gig, but most of all, I like being alone. And I feel like I have to justify that somehow, because our society frowns on that.

Think about it: The police catch a serial killer. The TV news interviews his next door neighbor. What does she always say? “He kept to himself.” As if that explains why he murdered people.

I happened to catch a TV show about eccentric people in Minnesota. They were interviewing the sister of Francis Johnson maker of the world’s largest twine ball. When asked what she though motivated her brother to undertake such an endeavor, her answer was, “Well you know, he never did marry.”

Loner, recluse, hermit. I am struggling to come up with a list of similar negative words for extreme extroverts.

I just realized that this post will go up on Valentine’s Day. Happy Valentine’s Day to you all! I don’t have a valentine this year, but I never rule out the possibility that I could bump into Mr. Right at the grocery or happy hour or on a plane. It’s been 56 years and it hasn’t happened yet. I would be happy if that happened, but will also be content if it doesn’t.

I just sent a valentine to U.S. Speaker of the House Paul Ryan, urging him to pass the prison reform bill currently under consideration in Congress.  It was easy–please do the same if you are a US citizen.  Just watch this video valentine from Alicia Keys, then submit the form that follows it.