This is the sixth post in a series on studying Spanish in Mexico that starts here.

I returned from my inaugural week of Spanish immersion and started graduate school. A few months later, I returned for three more weeks.

It was on this was the trip that I had my “international awakening”—the experience that committed me to working in international development. Years before, I had worked for the American Refugee Committee for two years on contract, writing their newsletters and annual reports. I read a lot of background materials and interviewed employees to get material. I already knew that terrible things were happening in Sudan; this work required me to know the gory details. However, nothing compares to being there.

I returned to the same school and requested a home stay with Mirta. I couldn’t wait to see her again and bask in the warmth of her household. Since I was in grad school, I could take all the classes I wanted in addition to those in my program, so I already had a semester of Spanish under my belt and I was excited to be able to talk to her more. Things had been falling into place: The maid’s name wasn’t Ella. “Ella,” meant “she” in Spanish. If you know Spanish you may be shaking your head that I didn’t know this sooner, but it was one of many light-bulb moments in learning a language I found thrilling.

Since I was staying for three weeks, I would be more involved in the life of the school. Cemanahuac specializes in Spanish for teachers, social workers, and heath care professionals. They asked me to bring donations of vitamins if I could, so I took up a collection and filled a suitcase.

This is my former housemate and her son. I financed this trip, and many to come, with funds from my part-time student job, student loans, and rent from people who shared my space or rented the whole place when I went for extended periods.

Mirta had no recollection of me. I felt wounded. That first week in Cuernavaca had been so vivid to me. I attempted to jog her memory, “I’m from Minn-eh-sota, near Can-a-da, where it’s very cold, remember?” I said in Spanish.

She gave me a kindly but blank look. She nodded and smiled but it was obvious I was a blank slate to her. I knew Mirta was married to an elderly, retired doctor she had to care for and support. She had this big compound too, and she worked as hard as the maid to keep it up. Mirta needed students to pay the bills. She was saintly, listening to our stammering, canned Spanish 101 attempts at conversation. She was genuinely warm. We weren’t all white 22 year olds. But as soon as one student left another arrived, and we probably all blurred together.

There’s a phenomenon where people go on tours of slums in the developing world and snap photos of the residents like they’re zoo animals. I hope I wasn’t like that, but my mouth may have gaped open a few times.

I was really into my Spanish studies and hadn’t paid much attention to where we were going for a “field trip” on Saturday. About 50 of us traipsed onto a bus and we drove for an hour. My head was swiveling back and forth from whatever conversation I was having with the student in the seat next to me—she was an African American woman who worked for the U.S. State Department as some kind of administrator and lived in Washington, D.C.—and the scenery out the window.

I was looking at her when I saw her eyes lock on to something in the distance over my shoulder. “What is that?” she wondered.

I turned to look and my first thought was, “A mountain?”

“But look how colorful it is. And why are there so many seagulls?”

Then one of our teachers stood up, pointed to the mountain, and announced, “Welcome to Miacatlán garbage dump city.” 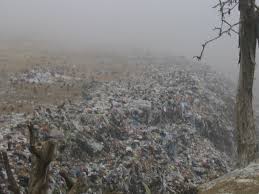