This is the seventh post in a series about a UK road trip that starts here.

Rebecca and I were sitting in the VIP tent at the Mini festival, pinching ourselves, when a bunch of loudmouths barged in. Oops, turns out they were my fellow North Americans. 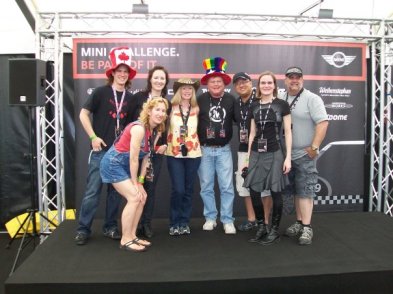 Rebecca and I were waved over to join them by a tall woman dressed in black and wearing extreme eyewear.

“I am Dagmar,” she said in a clipped German accent, “head of BMW’s Mini Cooper North American Customer Relations Division,” or some such. “I would like to give you a warm welcome to Silverstone and Mini United.”  She never cracked a smile; she was about as warm as an ice cube.  Dagmar gave us an orientation to the VIP amenities.

Our feedings?  VIP toilets? And those coolers …  for years I had a repeated dream in which I entered a house brimming with priceless antiques and treasure chests full of gold coins and precious jewels.  Suddenly I would realize that all this was mine.  I have no idea what that dream meant but I felt it had come true now as I stood before a tall glass-front cooler stocked with good German beer and bottles of wine including my favorite, prosecco.

“Anne … Anne!” Rebecca was standing next to me, trying to snap me out of my trance.  “Your compatriots have the inside scoop on why we’re really here,” she said as we rejoined them at a table.

A tall guy wearing a tall fuzzy hat with a Maple leaf said, “I got the low down from another employee last night. BMW budgeted for 500 North Americans coming to the festival.  Only a select few, like the auto journalists and the big collectors, were gonna get the VIP treatment.  But then the recession hit and only 15 of us showed up!”  We all laughed.  There was one rich guy among us, but most of us were regular middle class people for whom our cars and trips like this were a budgetary stretch.

People often assume that Minis are super expensive cars.  How much things cost is all relative, so I’ll just say that they cost about the same as a Subaru Crosstek or Legacy, a Mazda 3, or a Toyota Camry.  So you could spend a lot more on a car, or a lot less.

We waited for our first feeding, aka lunch, and shortly before noon the pit crews from the rack track poured in.  BMW must have reckoned it might as well feed them the good grub, too. 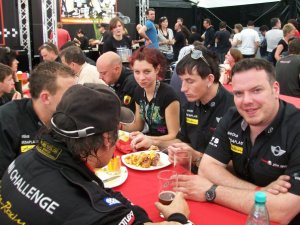 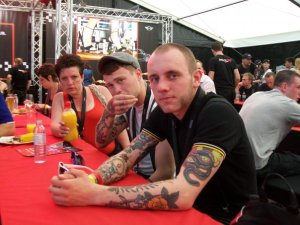 I wonder which bunch Dagmar found more distasteful—us rag-tag North Americans in our jeans and T-shirts and fuzzy hats, or the tatted-up mechanics?  Not exactly the high-class clientele she’d had in mind, perhaps.

We enjoyed a light lunch of fresh salmon and salads and desserts. 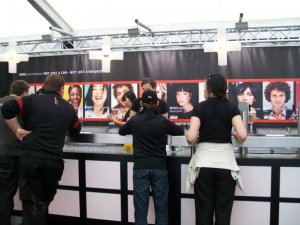 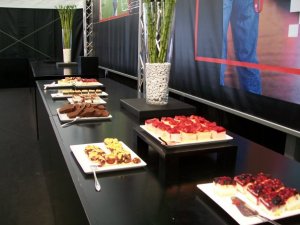 Then it was off to explore the festival!  Rebecca and I slipped a few beers in our swag bags.  Tacky, I know, but since the swag had included a Mini bottle opener, we figured we were obligated to field test it.

BMW has done its brand research.  Mini owners love to “motor,” we love good design, and we love adventure and fun. Not all of us are all of these things, but you get the picture.  There are all sorts of Mini events going on around the world all the time, like group road trips, music festivals, and art and design extravaganzas.  They’re all organized by Mini owners; Mini United is the only one sponsored, every three years, by BMW.

To give you an idea of how passionate Mini owners can be, here are some Minis with the equivalent of car tattoos showing where their owners drove from—in order—Budapest, Kiev, Moscow, and Gdynia, Poland. 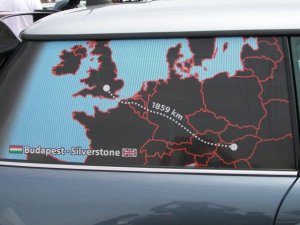 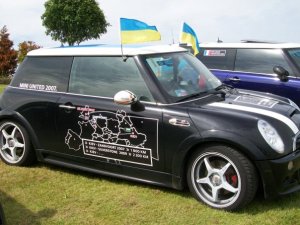 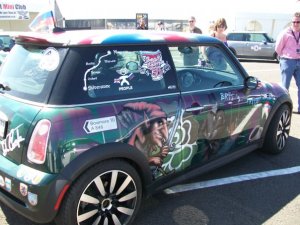 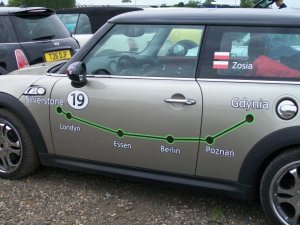 These are just the Eastern Europeans; there were hundreds more from Western Europe, North Africa, Turkey, and Asia.

“This puts things in perspective,” I said as we clinked a couple of beers.  “Yes,” said Rebecca drily, “I guess our epic 200-mile drive was worth it, if you like this kind of thing.”