As you may recall if you’ve been reading along for a while, I planned obsessively for this trip and felt anxious about what might go wrong.  For instance I feared my car would break down in the middle of nowhere so I had all sorts of maintenance work done on it and I joined AAA (the American Automobile Association) a few days before I left.

None of the things I’d imagined would go wrong, went wrong.  What happened was more ambiguous and thus, more stressful.

Lynn arrived as planned and spent the night at my place.  She showed me the guide books and maps she had brought and I said I wouldn’t bring most of mine since hers looked better.  Vince had moved out that morning, so we went to visit him briefly in his new pad before we rolled out of town.  Lynn and Vince had been hearing about each other for years.  It’s great when the important people in your life meet each other.

We left St. Paul around 8am.  We had a lot of catching up to do, and the miles peeled away quickly as we cut across southeast Wisconsin.  I needed to gas up near Warrens, which is home of the Cranberry Discovery Center and Yogi Bear’s Jellystone Park—two sites I’d visited in the past and knew would be strange and wonderful to British eyes.

Lynn had never seen cranberry fields; here is what they look like:

We drove around Jellystone, a massive campground for families with kids with a water park, rides, and cabins.

The area was deserted, since it was only early April, and I was glad the gas station was even open.  I filled up as Lynn perused the offerings inside—gun magazines, cranberry wine, bowie knives, cranberry beer, coon skin caps, and a hundred kinds of beef jerky.

Back on the road, we were quickly in Madison, where my cousin Bob lives with his wife Paula.  We were joined by my niece Emily, who attends the University of Wisconsin Madison.  Bob had promised “light refreshments,” which turned out to be a huge spread including many Wisconsin cheeses.  They brought out the inevitable cheese head, an accoutrement of Wisconsin Badgers football fans, which Lynn refused to wear but which I was happy to model: 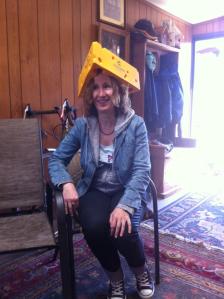 We talked about politics.  Lynn, probably like most foreigners, is appalled and bewildered by the rise of Donald Trump.  Bob is a radio news reporter, so he’s steeped in politics.  Paula has been apolitical until this year, but the rise of Trump has got her reconsidering whether to jump into the fray.  Emily, being a college student on one of the most liberal campuses in America, has no shortage of opinions.

Paul is Native, and we lucked out that the spring pow wow was taking place that day at the Madison civic arena.  A pow wow is basically a big social gathering of a tribe—in this case, the Ojibway tribe which is spread across the Dakotas, Minnesota, Wisconsin, and central Canada—to dance and drum.  It was unclear to me if there is any spiritual significance to it all.  There were lots of colorful costumes—they prefer the term regalia.  There were cute kids running around and stalls selling jewelry and fry bread and pop. No alcohol was allowed on the premises.

Since I’m not Native I didn’t take photos because it would have felt like I was photographing animals in a zoo.  But plenty of other people do take photos at pow wows and post them online: 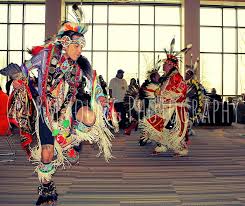 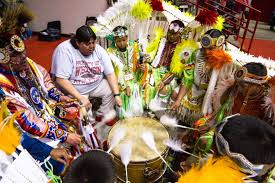 After a couple hours it was time to leave so we could get to Chicago by dark.  If you’ve never driven the expressway into Chicago, flanked by giant semi trucks going 85 miles per hour while fumbling for coins for the toll booths, you haven’t lived.  I’ve done this drive half a dozen times and it is nerve wracking.

As I started the car Lynn exclaimed, “Damn!  I must have left my maps and books on your dining room table!”  That’s when I heard the “DING DING! DING!” and my engine light came on.