This post is part of a series about a road trip to New Orleans that starts here.

After what seemed like hours, Lynn and I stumbled out of the van Gogh exhibit.  I blinked like a mole because it had been so dim in there.  I needed to find a bathroom and asked a nearby guard, who launched into the story of her life, which included having diabetes, moving to Chicago from Gary, Indiana, and being a weight lifter.  I made the mistake of saying, “I lift weights too,” and that gave her license to talk some more.  She wasn’t talking with me or even to me; she was just talking.

Lynn had done an about face right away but I would have felt mean walking away. In my imagination I filled in the story of her life—how she must be an impoverished single mother who had to do this excruciatingly boring job, how it must be so hard on her back to stand all day, and so on.  Then I remembered I needed a bathroom, butted in to ask her again, and made my escape after many Minnesota-nice thank yous and repetitions of “Have a nice day!”

This type of talking was a theme on our trip, I realize in retrospect.  People launching into long, one-way recitations about themselves, with no encouragement from us.  There were never any questions about us—none of the give and take that  turns talking into conversation.  It’s like being held prisoner by words.  What is that about?  I’ve experienced it from time to time throughout my life but is it more prevalent now?  Does it have something to do with social media and people wanting to tell their stories?  Is it a symptom of loneliness and isolation in our modern society?

Speaking of long talkers, David our innkeeper had recommended that we see the miniatures at the Art Institute.  “I took mama and Miss Rose to see them, when they visited from Kentucky,” he said. “Mama didn’t say nothin’ the whole time.  I wondered if she didn’t like it. Then I finally said, ‘Mama, don’t you like them?’ and she said, ‘Oh I do!  I do, but I can’t imagine dusting all of them!’”

I laughed and Lynn fake laughed but I could tell she was puzzled.  Once we actually got to the miniature rooms and she saw what they were, she explained why.  “When he said miniatures, I thought of tiny portraits that people used to have done before there was photography.”  Here is an example of an English miniature: 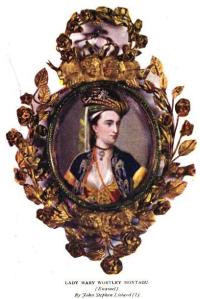 Here is what the miniatures in the Art Institute are: 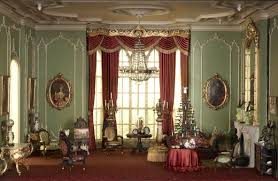 Miniature rooms from various periods and countries—hundreds of them.  They are really fun to look at and yes, they must be a pain to dust.

We thought we were done but to reach the exit we had to walk through the Asian section.  So we took another hour or so to admire works from Japan, Indonesia, China, and India. Lynn has been to all these places.  She’s Anglo-Indian and has been to India many times.  She worked for Oxfam in Aceh, Indonesia after the Indian Ocean tsunami.  So she’s learned a thing or two about the vast territory covered by the label “Asia.”

“But I never retain anything I’ve learned,” she explained.  So she knew which god was Ganesh and which was Krishna but I was definitely going to have to Google them later to learn more.

David had also recommended that we visit the Chicago Cultural Center, one block north and across Michigan Avenue from the Art Institute.  “It was a library, but now they hold concerts and have art exhibits there, and it’s fabulous,” he said.

And he was right!  I had never even heard of the place, and it turned out to be the highlight of Chicago for me.  The building was completed in 1897 and features the largest dome of Tiffany glass in the world: 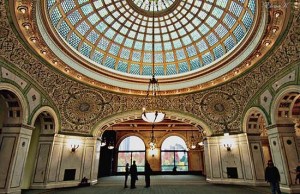 I loved the details.  It wasn’t called The Gilded Age for nothing: 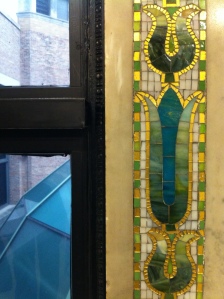 I was happy to realize that I still had many classic works left to read: Scott, Burns, Tennyson, Gray.  Someday—when I can no longer travel. 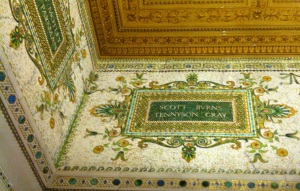