As I wrote in the last post, I had been to New Orleans before and toured a plantation, something my traveling companions didn’t want to do this time.  Another thing we didn’t do but which I would highly recommend is an alligator boat tour.

If we had alligators in Minnesota, and if we had alligator boat tours, you would be required to sign a legal waiver, watch a 15-minute safety video before the boat left the dock, and wear alligator-proof helmets and vests.

Not so in Louisiana.  About 40 of us tourists, many of whom were very obese, crowded onto a pontoon boat and headed into the swamp with our Cajun guide. He joked about how you should never wear white if you went canoeing in the bayou, because an alligator’s favorite food is egrets, and egrets are white.  Half of us were wearing white.

To demonstrate the “alligators like white” principle, he pulled out a bag of giant marshmallows and scattered them onto the surface of the water.  We were quickly surrounded by alligators, some of which were nine or 10 feet long.  Then the Cajun pulled out a bucket of chicken parts.  He extended a rickety plank out over the water, then knelt and held a chicken leg over the water.  It was kind of like feeding a goat in a kiddie zoo, except here you could get your arm ripped off.  Each time a gator launched itself out of the water and grabbed a hunk of chicken, the Cajun would yell, “Whoa!  Whoo daddy!  Whoo mama!” and jump back, causing the boat to rock precipitously.  This went on for a couple hours.

Now, some people would get bored with this but I found plenty to keep me interested. The other tourists, the Spanish moss, a little abandoned cemetery in the middle of nowhere, and what looked like a hunting shack.  The highlight was when we got to pass around a baby alligator. 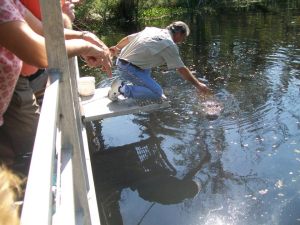 No one wanted to go this time around in New Orleans.  Maybe I shouldn’t have mentioned the part about the boat rocking.

Each morning we would amble over toward the French Quarter via the wonderfully-named streets of the Marigney: Burgundy, Esplanade, Elysian Fields, Spain, Dauphine, Chartes, Mandeville, St. Roch, and of course, Music Street.

Here’s a suggested philosophy for life.  “Dream Big as Fuck!”–on garbage can?

I could walk around New Orleans all day and just look at houses. 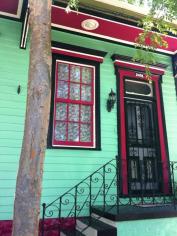 Some of the porch ceilings are painted light blue, which I took to represent the sky.  However I later learned from the New Orleans Gambit newspaper that this color is called “haint blue” and it’s meant to keep out “haints,” or evil spirits. 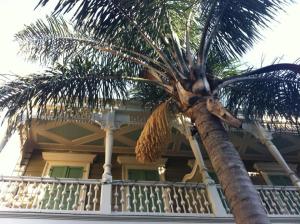 “It was believed that haints could not cross over water and painting these entrances to resemble water was a way to trick them. This folklore can be attributed to the Gullah, a group of African-Americans, originally from rice-growing regions of West Africa.”

I like to take the Hop On Hop Off Bus in a new city if it’s available.  It’s a good way to get oriented, and especially if the weather is clear and there’s a space on the top deck, it’s a nice respite from walking and crowds. Then, as the name implies, you can hop on and off to see various sights.

We hopped off in the Garden District to take a walking tour.  The bus stopped at a gas station that had The Filthiest Bathroom I’ve ever had the displeasure of using.  Nonetheless, I always feel obliged to buy something when I use a gas station bathroom, so I grabbed a bottle of water and stood in the non-line of people waiting to pay.  An impeccably-dressed man was next to me, and when I said “Have a nice day,” to the cashier he looked at me for the longest time, trying to figure out what I’d said.  Then he said something to me in such a southern drawl that I couldn’t understand him.  We laughed and smiled—the universal language—even when you’re supposedly speaking the same language.