Our last day in New Orleans.

We started the usual way, the four of us out on the street: “Should we go to the right?” one of us would say.

“Are you asking, or do you want to go right?”

So we went to the right.

There’s a lot of talk about us Minnesotans being passive aggressive.  We hint at things instead of just saying what we want.  I try not to do that, but sometimes I feel I’m being mean just stating what I want.  I’ve traveled a lot; I’ve lived and worked with people from lots of countries and cultures.  Except for the Donald Trumps of the world, the desire to avoid confrontation—even the appearance of confrontation—seems universal.

A Mimosa at 10 in the morning always helps to smooth out bumpy interactions, so we ordered four, then wandered around the French Market.  This is a vast collection of booths with vendors selling everything from Mardi Gras masks and beads, dried soups and artisanal soaps, artwork and Alligator heads.  I bought an alligator head for my six-year-old nephew.  This would secure my position as adored aunt.  I found a voodoo doll for a friend; it was made in China.  Everything was made in China, of course, except maybe the alligator heads.

There was a Tsunami of Stuff.  That’s how the world is now.  I will probably sound old here, but when I was a kid and young adult I don’t recall there being so many shops that sold gifts and other useless things.  There also weren’t as many thrift stores, probably because we weren’t buying knick knacks at gift stores for our friends, who would later secretly re-gift them or drop them off at the Salvation Army.

By now, the fifth day of the festival, the French Quarter was filthy, smelly, and heaving with people.  The weekend brought in a younger crowd.  Molly and I drank beers while we walked along; this is a particular rare pleasure for me.  The only other time I can recall being allowed to do this was at the Notting Hill Festival in London, where I enjoyed a Strong Bow while having my ear drums assaulted by 10 Caribbean steel drum bands playing at once.

In Minnesota, you have to wear a neon wrist band and stand in a corral like a criminal to enjoy a beer at a festival.

We found a place to sit, in the sun, and listened a band called to Cha Wa, which is a “Mardi Gras Indian funk band.” 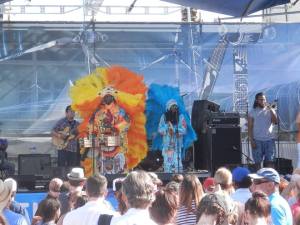 They were great.  We walked to the waterfront, which was a 98% African American crowd.  It was great to see, after visiting the Civil Rights Museum, so many people— young and old, families and couples, flocks of teens—just out and enjoying themselves.

We took the streetcar back toward our neighborhood.  Don’t call it a trolley—apparently that’s very important to the natives.  It goes about five miles per hour, but we weren’t in any hurry.  At one point we stopped and the driver got out and wiggled the cable by hand to get us going again.

A few more drinks on Frenchman Street, a few more incredible bands.  It was the last fever peak of the festival before reality hit on Monday morning.  The drunks were sloppy, the streets were greasy, music was everywhere, I saw a guy wearing a green chicken costume, and someone else wearing a skull mask riding a unicycle.

The next day Molly flew north to Minneapolis/St. Paul, Minnesota, where her husband would pick her up and drive her home to St. Croix Falls, Wisconsin.  Christine left to catch her flight back to Oxford, England.  Lynn and I headed north in the Happy Mini, also toward Oxford—Oxford, Mississippi.