Inside our Air B&B, there were a dozen doughnuts on the kitchen table with a note: “Welcome to our Air B&B!  We hope you will enjoy your stay in St. Louis!!!”

Now I’m sure the owners of this place are very nice people.  However I have to say that the overuse of exclamation marks is bordering on an epidemic.  Just the other day, I read a brochure from Ramsey County about recycling and it contained seven exclamation marks.  I’m guilty of over punctuating myself.  In my defense, everyone else does it, so if I don’t end my emails to coworkers with exclamation marks, I feel like I’m being a bitch.  If I don’t end garnish every Facebook post with an “!” I fear I’m not as enthusiastic about cats in clothes dryers as I should be.

“Who doesn’t love doughnuts!” I said with gusto.

“Neither do I!” And it was true; we both find them disgusting.  I don’t understand the obsession with doughnuts.  When Krispy Kreme opened in Minnesota it was bigger than a Springsteen concert.

“But what will we do with them?” Lynn looked worried.  If we don’t eat them, they’ll think we were unappreciative, which of course we are but we don’t want them to know that.

“We could dump them in the trash behind some other house,” I suggested.  “But that seems wasteful.”

Lynn was perusing the hand written notes on a bulletin board on the kitchen wall.

“Dear Yuri,” she read. “Thank you so much for sharing your home with us!!”

“No!  I paid $125 for the night,” I replied.  “It’s very nice.  It’s worth $125.  But they aren’t sharing it, they’re renting it out.  I don’t know why it’s called the sharing economy. That makes it sound like you’re doing it out of altruism. Uber’s another one—Uber drivers don’t give free rides.  My sister is an Uber driver and she’d never do it if it wasn’t for the money.  Maybe we’re just old and we don’t understand.”

“Very strange,” Lynn pronounced. “Well it was very kind of them to leave the doughnuts, but I rather wish they’d left a bottle of wine.”

We walked toward the botanical gardens and arrived just in time to be told, “We close in one hour, so you’ll have to hurry.”

Since we could never see it all by hurrying anyway, we took our time and walked through an enormous domed structure. It held several different environments, from tropical rain forest to Mediterranean. There were Dale Chihuly glass sculptures throughout.  Chihuly is really prolific.  We’ve got a massive sun sculpture of his at the entrance of the Minneapolis Institute of Arts.  The Chicago botanical gardens features quite a few.  Now I admired more.  Not bad for a guy who is blind in one eye, eh? 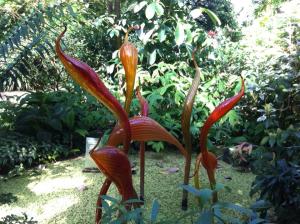 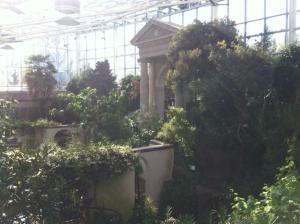 I loved the Mediterranean garden, which reminded me of a long, long hike I took along the Mediterranean coast of France.  How is it that you can be in one place and enjoy it because it reminds you of another place?

The gardens were a great way to decompress after the drive, and I later learned that they are considered the best botanical gardens in America.

Next, my plan was for us to walk to the restaurant where we would meet a woman I’d gone to grad school with for dinner.  On the map it looked like it was a couple blocks away.  I asked one of the botanical garden employees, just to be on the safe side.  She was extremely friendly but suggested it was too far to walk.  Well!  Too far for some people, maybe, but not me.

“Are you okay with walking?” I asked Lynn.

“Shhure…” she said, uncertainly.  And so we walked, and it turned out to be two miles, but we’d worked up an appetite by the time we arrived at the Shaved Duck.