This post is part of a series about living in Dublin and winding up in a brothel in Dubai.

Eddie’s house was so tiny I expected a hobbit to jump out of a closet.  The floors were slanted, the stove looked like a toy, and the door hung crookedly off the bath so it wouldn’t be any trouble for him to keep an eye on me in there.  I hadn’t been attracted to Eddie in a dark smoky pub, and seeing him in daylight didn’t change anything.  He painted a picture of the house sharing arrangements.  “I go out every night, and when I come home in the early morning I blast me music and drink a few more pints.  It’s my house, so I’ll smoke in it.  If you’d like to cook for us, that’d fine with me.”

I observed myself doing mental gymnastics to convince myself this would all be fine.  I wanted out of the hostel.  The serenity and confidence I had banked in England was gone.  The fact that it was gone made me feel like a weakling.  I had become a female Woody Allen, worrying, analyzing, fearful, neurotic. I was so afraid of being ripped off that I hid my watch—a Movado—in a zipped pants pocket, then promptly forgot about it and threw the pants in the wash.  The watch had been given to me by a jerk boyfriend but was the one beautiful piece of jewelry I owned, and it came out in bits.  Stress does funny things to the mind.

I listened to meditations on my MP3 player: “Sense a soft shower of shimmering light …” said the soothing voice, as the woman in the bunk below me hacked a tubercular-sounding cough.  I attended meditations at the Sri Chinmoy Centre and went to Alanon. But I just couldn’t shake the anxiety.

Eddie kept saying things which indicated he knew sharing the house would be a disaster, such as “I’d probably end up hangin’ meself when yerself didn’t love me.”  Like many men in the British Isles, asking a woman out on a date was not in his playbook, and he wasn’t yet drunk enough to just grab me and snog me.  He must have sensed I would have reacted negatively to either approach.  We sat at his wobbly kitchen table and he slowly drew me a map of Dublin and advised where else I could look for flats, stalling for time. 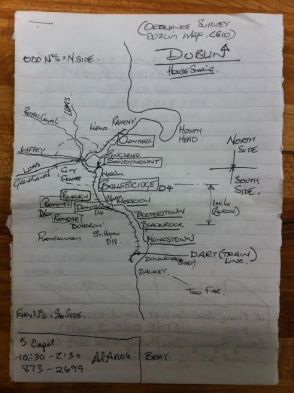 I admired his engineer’s pencil sharpener, which he gave me and which makes a great eyeliner sharpener.

After two weeks I landed a room in a spacious maisonette.  It had a living area and kitchen on the first floor (in America, the second floor), and three bedrooms and a bath on the third.  I shared it with a French guy who was building a website to help football fans find pubs in real time to watch specific games.  He only emerged from his room when his girlfriend, a Canadian, came over.  The other flat mate was an English guy who worked for Google.  I only saw him once or twice, but several times a week I would come down to breakfast to find a young woman hanging about—someone he had slept with and was done with, but who wasn’t done with him.  “So what time does Paul usually get up?” they would ask.  Or, “How does Paul like his tea?”  I would grumble, “I dunno,” until they took the hint and left.

It took a while with my arm in a sling, but the flat was very nice once I scrubbed it from top to bottom and painted my room, which overlooked some sort of friary. 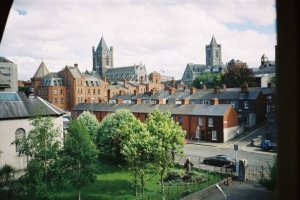 There was a methadone clinic on the other side; the flat had been burgled recently by an addict who kicked in the door.  There was a primary school on the other side of the flat, and Christchurch Cathedral was nearby, so I heard children playing and bells ringing throughout the day.

Things were looking up.  I met a Canadian woman at a travel agency who was game to go anywhere.  Because, once my anxiety ebbed away, it was time to travel.