This is the story of how I wound up in a brothel in Dubai, a series that starts here.

After finishing my meal at the brothel … er, TGI Thursdays, I took a taxi back to the hotel.  I apologized to Toni for yelling at her.  She apologized for calling herself an American.  Wait.  That doesn’t sound right.  You know what I mean.

I told her about the brothel and we shook our heads, imagining the young women in our lives working as prostitutes—or the men in our lives hiring prostitutes.  We talked about the irony that Dubai arrests tourists for making out on the beach, but that under the gaze of the Sheikh you could drink, smoke, and fornicate if you knew how to find the place.  We talked about puritanism, patriarchy, and power dynamics.  We agreed that Dubai wasn’t much different from North America, in that appearance and reality were completely different, like when you read about a child molester and you could bet he would turn out to be a Christian pastor or a Boy Scout leader.  We discussed the socioeconomic conditions and gender imbalances that made sex work the lesser of terrible ways to survive in a tough world.

We had a lot in common after all.  We bonded.  We agreed we didn’t need to spend every moment together.

The next day I took a bus to the Mall of the Emirates.  There was a young woman sitting across from me dressed in jeans, a tight-fitting but long-sleeved T-shirt, and a baseball cap.  The woman sitting behind her wore a full burqa; even the eye opening was covered with black mesh.

The bus route took us out of the old town through the desert.  I could see trailers in the distance—what we would call manufactured or mobile homes in the US.

It’s difficult to build an edifice complex without cheap labor.  These trailers in Dubai were home to the Pakistani, Bangladeshi, Sri Lankan, and other migrant workers who were building skyscrapers and malls for the Sheikh.  I had read about how they were exploited and trapped out in the desert before I’d left Dublin.  The trailers certainly looked desolate.  I wondered how many brothers, fathers, or husbands of the TGI Thursdays women were also making a living in Dubai.

The mall was like any mall in Minnesota.  Not.  It had an indoor ski resort!  It had shops where you could buy every kind of burqa you desired, as long as it was black. 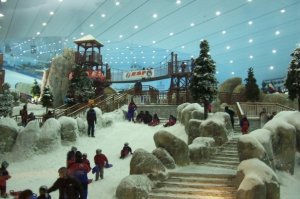 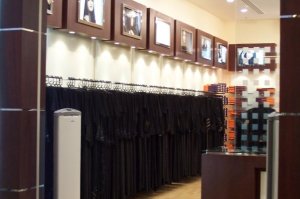 Like an idiot tourist I bought a three-foot-tall hookah pipe with lots of detachable, fragile parts which I then had to lug around with me on the bus, taxi, plane, and the bus in Dublin.  Having my arm in a sling didn’t help.  Take my advice, if you really want a hookah pipe, order it on Amazon.

Later that day I wandered around the old part of town near our hotel looking at store after store that sold gold.  Who bought this stuff? 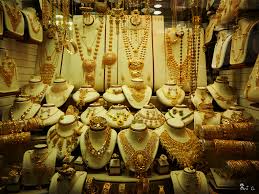 Then I saw a beautiful tunic in a shop window and went in to try it on.  It was a bit big and the proprietor offered to tailor it for me on the spot.  He took the opportunity to fondle me and I thrust his hands away and he just laughed.  He did alter the tunic so I guess we both got what we wanted.  Below is what it looked like, modeled by a woman who actually looks good in it.

I bought some stamps at a kiosk so I could sent postcards.

I will give them the benefit of the doubt and assume they convey a message about zakat, or charity.

Toni and I went to a farewell banquet in the desert that night, complete with the obligatory camel ride and henna painting of our hands.  The next day, off we went back to Dublin.  Here’s a photo of the men’s and women’s mosques in the Dubai airport.

I started this series as a way of examining things that can go wrong while traveling.  In one week I will be in Rome.  If nothing goes “wrong” there like it did in Dubai, I’ll be disappointed!