As you might expect, the Vatican Museum contained hundreds of paintings of the Virgin Mary, crucifixions, and saints being burned at the stake, beheaded, and otherwise martyred.  I’ll focus on the non-religious treasures.

It was the off season, but still crowded.  Once inside, 99% of the visitors made a beeline to the elevator so they could get to the “main event”—the Sistine Chapel—asap.  My friend Lynn had told me that in their rush to get to the chapel, most people miss a splendid collection of art along the way.  I couldn’t remember exactly what she had written, so I just stopped and looked around.  Voila!  There was a massive spiral ramp leading to the same destination as the elevators.

None of my photos turned out, so you’ll just have to imagine a spiral ramp like in a parking ramp, maybe eight stories high, but instead of concrete it was made of marble, brass, and wood.  And it was lined with exquisite models of ships and boats.  I love maritime art, so I was happy although I was sure this wasn’t what Lynn had meant.

The display was meant to illustrate the world’s seafaring cultures over time, from the Phoenicians to Papua New Guinean headhunters, the Yoruba of Nigeria, Native Americans, the Vikings, the Chinese, the Spanish, the English.  The models at the bottom of the ramp were of birch-bark canoes with naked warriors holding spears, and as you walked up the boats became more sophisticated, their occupants wore more clothes, and they were armed with more deadly weapons.

I had it all to myself.  I felt lucky but a little sad.  Some anonymous team of historians, art curators, and skilled model builders had devoted years of their lives to telling this story, and hardly anyone knew it existed.

At the top of the ramp I rejoined the crush of visitors pressing on to the Sistine Chapel, but then I diverged when I noticed a room full of statuary.  Was this what Lynn had meant?  There were no placards describing who they were but they looked really old.  I know that sounds dumb—everything in the Vatican is old—but I decided to believe that these were the treasured works of art that everyone misses.  Everyone except me, ha ha.  There was nothing about them on the map, but I did notice that there were about 30 rooms between me and the Sistine Chapel, and suddenly I didn’t feel so smart.  I glanced at each statue for a couple seconds, then scurried on.

The map room was what its name implies: a room filled with maps of all the Italian regions.  My photos won’t do it justice, but you’ll get the idea. This was the room where they plotted empire. 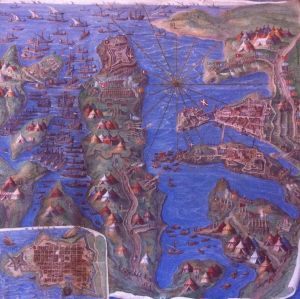 Next were the rooms I’ll call the “Bits and Bobs Collection,” room after room with cupboards full of ancient glass, pottery, coins, etc.  I could imagine some flunky saying to his superior, “Your holiness, what shall I do with this pottery lantern?  It’s only from the Roman period.”

“Oh, throw it in a cupboard in the back room with all the other bits and bobs.”

This 1510 map was in the bits and bobs collection.  Do you recognize it?

There were rooms crammed with art depicting animals.

After several hours I managed to find the Sistine Chapel.  I would love to be one of the guards who stand on a platform and yell over and over, “No photos!”  You’ve seen art from the chapel a hundred times, so I won’t write about it.

Next up: the Egyptian collection.  My favorite was Anubis, the dog god and perhaps the world’s first palindrome.

Lastly was the Etruscan collection.  Not much is known about this civilization that founded Rome, and even less was provided in signage at the museum.  I learned that they were the “bridge between the Romans and the Celts,” but what does that mean? 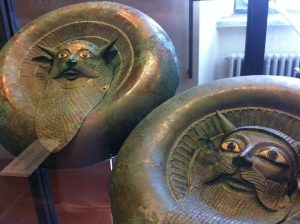 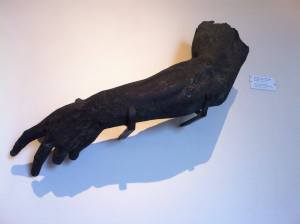 It was 2pm; I took a break to enjoy the views from the windows, ate a protein bar, then exited and walked toward St. Peter’s Square. 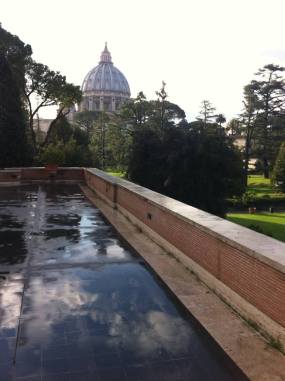