I spent a day visiting all the sites I could in Rome: Piazza Navona, the Quirinale, Trevi Foundation, the Spanish Steps, and the Coliseum complex.  Everything took twice as long as planned because I got lost several times on the way.

I had read a lot about what went on inside the Coliseum—e.g.: the tens of thousands of humans and animals slaughtered there in gruesome entertainments, the clever pulley systems for lifting hippos and lions up from the basement to spring upon the hapless gladiators, the seating system that made it clear which of the 50,000 spectators were vestal virgins, senators, knights, or plebeians.

I ran into this Chinese volleyball team, who I had also seen at the Vatican Museum.

I had not known that the Coliseum was built using “the spoils of the Jewish campaign.” 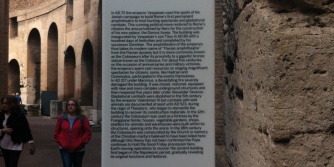 You probably can’t read this, but I love how this is worded.  If you didn’t know better, you might think that the Jews had carried out the campaign, rather than the campaign being carried out against them.  This was about the only interpretive signage in the Coliseum, so I was glad I had rented an audio guide.

I have to say that my visit was spoiled by the swarms of self-absorbed selfie takers.  I wanted to just stand and take it all in, but they were literally thrusting themselves and their selfie sticks and their cameras in my face at every turn.  I gave them lots of withering looks and told them off in my head, but they didn’t pay me any attention.

I was most moved by the Pantheon—something about its austerity—and the fact that it was the first of many churches I would see that had been built on top of an earlier Roman, Jewish, or Muslim place of worship. 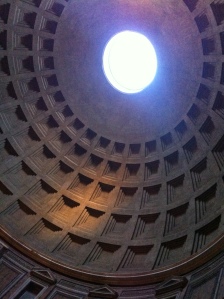 The hole in the dome is open to the elements, and I was excited to see rain splashing down on the marble floor, since it had been raining since my arrival.  Alas, this was the one hour that the rain ceased.  I wandered back to the hotel—I can always find my way back— feeling satisfied.  Tomorrow I would leave for Sorrento and the Amalfi Coast.

This part of my journey had given me the most of what I call “Kindergarten stomach”—that part scared, part excited anxiety I had before the first day of school every year when I was a kid.

My plan was to take a train from Rome to Naples, then another train to Sorrento, stopping halfway to spend the afternoon at Pompeii.  I had booked a hotel in Sorrento, which would be my base.  From there, I would catch the coastal bus and hop on and hop off in Amalfi, Portofino, and Ravello.  The following day I would take a boat from Sorrento to Capri and spend the day there.

The following day at 6am, I would take the train back to Naples, then another train to Rome, then a third train to the airport to catch my 11am flight to Malta.  “It’s so easy to zip around Italy by train!” claimed the guidebooks. And so I had planned this precision operation, with no room for train strikes, rain delays, or a leisurely breakfast.

Then I had an epiphany.  I cancelled my last night in Sorrento and booked myself back into the Hotel Italia in Rome.  I would spend the night before my flight to Malta in Rome so I wouldn’t have a heart-pounding relay race to the airport.  As a bonus, this meant the Hotel Italia was more than happy to store my suitcase while I went to the Amalfi coast with just a back pack.  So no lugging a case on and off and on and off and on and off of three trains.

I don’t expect you to follow all of this, especially if you’ve never been to Italy.  My lesson is just this: plan ahead, but be prepared to change your plans if you realize they’re ridiculous once you arrive.