I kept hearing an old commercial in my head.  The refrain was, “She’s going to Capri, and she’s never coming back!” It was for dish detergent or something, and the idea was that it was so fantastic that it set women free.  Obviously, the one place you would go if you were freed from dishwashing was Capri, Italy, right?

So even though the rain continued off and on, I was determined to go.  I assumed the famous Blue Grotto would be closed for the season, but I would hike the Phoenician staircase from Capri town to Anacapri, the other town on the island.  The Phoenician staircase was 880 steps, just 80 more than my hike in Amalfi. Once in Anacapri, I would visit sites that were probably similar to the beautiful ones I had enjoyed in the rain in Ravello, such as the Ville San Michelle. If I had time, I would hike to Villa Jovis from Capri town.

I wondered if, at the end of the day, I should take the catamaran directly back to Naples from Capri, instead of to Sorrento.  It would take only 45 minutes, compared with an hour and 40 minutes on the Circumvesuviana train.  I had given up on seeing Pompeii; there just wasn’t enough time.

Here’s a photo of Sorrento from the ferry dock: 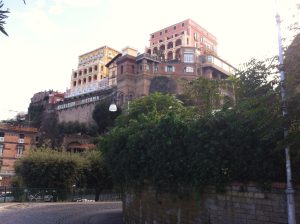 I was standing in line to board the catamaran to Capri and observing the two couples in front of me.  I used to spend a lot of time in Los Angeles and my guess was that’s where they were from.  Either LA or New York, but not Indianapolis.  The first couple was in their 60s, extremely tan, and wearing heavy gold jewelry.  The second couple: the man was in his 60s but his wife was one of those women who had had so much “work” done that it was impossible to guess her age.  35?  45?  60?  I knew I was staring too much but I was fascinated.  This couple, too, was extremely tan and wore lots of heavy gold jewelry.  Both couples were dressed in nautical wear, and the men were wearing baseball caps with longish white hair a la Bernie Madoff or Graydon Carter.  Captains of industry, if not of boats.

At the beginning of our ride, each time the catamaran sliced through a wave and slapped back down, we passengers all laughed riotously, including me.  It was like an amusement park ride.

After about 10 minutes it got very quiet.  I could hear the tan man behind me explaining to his taut-faced wife how to manage motion sickness.  “Don’t look ahead,” he advised, “stare out the side window, and don’t fight it.  I learned this when I learned to sail.”

Although I had taken an instant disliking to him because he was rich and I wasn’t, I was grateful to hear and follow his advice. I looked back and gave a sympathetic look to his wife but her face remained expressionless.  The ride was over in 20 minutes, which sealed my decision not to take the boat back to Naples.

This is Capri town, and a shot of the water that hints at how blue it might be on a sunny day.

Because of the limited autumn ferry schedules, I only spent about two hours on Capri.  I hiked the Phoenician stairs for 20 minutes in the rain, then turned back.  My heart wasn’t in it. 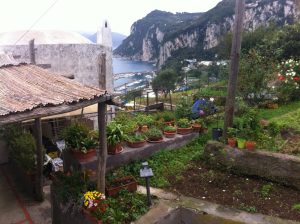 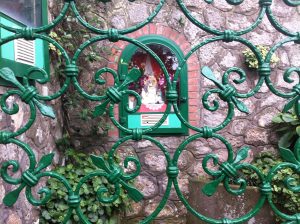 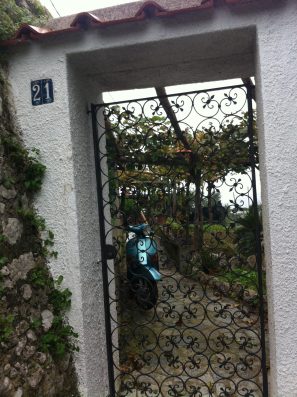 There were signs all over for Vespa rentals.  How fun would that be?!  But not today.  Riding a Vespa would be asking for a broken neck.

Back in town, I had 20 minutes before the ferry departed.  The first restaurant I walked into had no placards advertising sauerkraut.  There they were, the tan couples, enjoying plates heaping with freshly-prepared seafood.  This would have been it—the best restaurant I’d found in Italy—but I had no time to enjoy it.  I dreaded the return boat ride and thought bruschetta would be a better choice than squid.

The sea had calmed, making the ride back pleasant, if rainy.  For the umpteenth time, I thought, “I’ll just have to come back here in summer.” 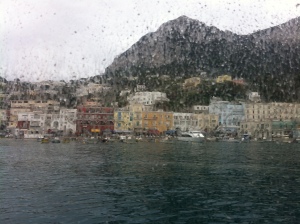