After four hours on a bus with, like, the Valley Girls from Colorado, we arrived in Toledo around 5:00 pm.

I had suggested Toledo when Lynn and I were exchanging emails about the trip.  I dimly recalled from my Jewish education that Toledo was a center of medieval Jewish mysticism.  I can’t say I felt any mystical vibes there, but there were definitely many Jewish—and Islamic—references.  Of course, any actual Jews and Muslims had been expelled from Spain in the 15th Century, but the city did its best to attract tourists based on its religious diversity of 600 years ago.

To sum up the weather in Toledo in one word, I would use the word “gloom.”  It was gloomy all day, with rain off and on, and dark at 6:00 pm.  Dark in the way of someone flipping off a light switch, not in the way of a slow, sweetly colorful gloaming.

I loved it.  I had loved Granada for its sunniness, and now I loved Toledo for its dreariness.  I’m flexible like that, and it’s a really good trait if you’re a traveler because you never know what you’re in for.  You have to roll with changes and surprises; to be delighted by them is even better.

We were famished after our long journey so we popped out onto the street to see what we could find to eat.  Everything in Toledo seemed to close at sundown.  Stores, restaurants, even the street lights, if there were any, were turned off.  This made it difficult for us to find our way around—not that we had any difficulties getting lost in the brightest daylight.

We saw a light at the end of a street and walked toward it.  It was a very unappealing-looking tourist restaurant with the same sign we’d seen elsewhere advertising pizza, hamburgers, schnitzel and sauerkraut, and other dishes that could be defrosted in the microwave for tourists from various gastronomically unadventurous countries.

But it was the only thing open, so we went in.  We were the only customers, it being “only” 6:30, and the kids who ran the place seemed flustered.  What could these tourists possibly want at this time of day?

“Oh look,” Lynn said, pointing at the oily menu, “They’ve got mussels.  Surely those wouldn’t be frozen?  And they come with chips.”

“Ooh, let’s find out!” Lynn enthused as we tried for 15 minutes to flag down one of the teen employees who were loitering in a clutch at the bar.  The mussels with chips arrived, along with a bottle of bubbly, and here’s what they were: 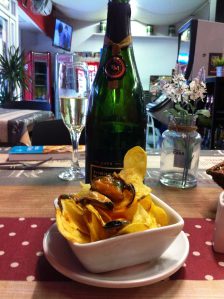 The mussels appeared to be smoked, and they were artistically (possibly accidental) arranged on top of potato chips, with a brownish red sauce poured over it all. Lynn looked dubious but after tucking in we both agreed it was delicious.  Of course we were very hungry, but so what.  The house cava or brut or prosecco or whatever it was cost about 5€ and was excellent.  As I’ve lamented before, why can’t we get good cheap house and happy hour wines in America?  It’s just not fair.

A tour bus appeared outside and about 75 Spanish-speaking tourists who appeared to be retirees poured in.  Every single one ordered a cup of tea.  “Not one ordered a beer or a glass of wine,” I observed.  “Maybe it’s an AA convention?”

“They’re pensioners,” Lynn answered, “on a package tour, and tea is included but they’d have to pay extra for a beer.”

I’ve been on package tours, and on none of them did we talk as garrulously as this group.

Suddenly, at some invisible signal, they all started to file out.  A woman explained as she passed us that they were on a high school reunion trip.  She said this rapturously, as though it was the most exciting thing that had ever happened to her.

Bless her. Being on a bus with my aged high school class would be a nightmare to me.