I was feeling kind of guilty about the nun bashing in my last post until I started writing this one about the El Greco Museum.

Lynn and I had seen paintings by El Greco in the Prado Museum, but in Toledo there was an entire museum devoted to The Greek.

The collection was in an old house composed of additions from different centuries cobbled together and connected by ramps or hallways; in some instances you had to go outside to get from Point A to Point B.  Our first stop was a video about El Greco.  It went on at great length about how he was distinguished from his contemporaries by his elongated figures made of long brush strokes.  He was nearsighted, the video said by way of explanation. 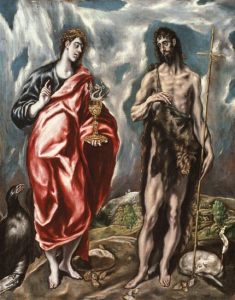 In addition, many of his subjects were painted looking heavenward with crazy eyes, and this was thought to be because he used patients from an insane asylum as models. 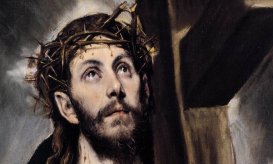 The nun would have made a great model for El Greco—I’m not saying she was insane, just that her eyes had this same look.

So those are the things that make El Greco a star.  He was so in demand that he had apprentices help him churn out paintings and it’s now difficult to tell who painted what.  I am at a loss as to why El Greco is considered a master while Margaret Keane is not. 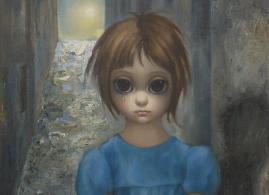 But as I’ve fully disclosed before, I’m not a New York Times art critic.

After shuffling along in the museum for a couple hours, we thought a brisk walk would do us good.  On the trolley tour we had spied what looked like giant escalators cut into the hillside, and the narration had said there was a nature walk.  The sun had come out, so now was the moment.

We attempted to find our way out of the city—ha!  Here is a map of Toledo set in the pavement, lest we needed reminding of what a labyrinth it was: 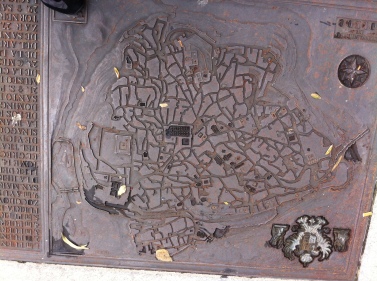 Eventually we found ourselves, quite by accident, outside one of the city gates where we could see the River Tajo.  I grew up near the Mississippi, so my inner Tom Sawyer kicked in and I joyfully crashed through the undergrowth toward the water.

“Where are you taking us!?” Lynn cried.

I ignored her until I stopped short at an orange plastic tape printed with “¡Cuidado!” every few inches.

“This must have been used to section off a path for a marathon,” I guessed.

When most people see things like this, they turn back.  I hopped over the tape and kept heading for the river bank.

“Where the hell are we going!?” Lynn asked, picking her way through the bushes behind me.

“I don’t know,” I replied.  “I just want to see the river.”  We reached the bank and stood looking at the muddy water.

“Well, just as you suspected—it’s a river,” Lynn said.

“Yep,” I replied, and we turned back toward the city.

There was time for one more museum, the intriguing-sounding Museum of the Visigoth Councils and Culture.  It was housed in the Church of San Romain, which had a small entry door set inside the giant-sized door that many churches have.

I’ve stopped mentioning how much entry tickets cost unless they vary substantially from the typical 4-5 euros.

There was a tiny glass booth just inside the door where an old man collected our €1 entry fee.  He gave us a piece of paper and we made for the exhibit but were commanded by him to stop at another booth three feet from the first one, where another old personage collected the piece of paper, stamped it, and gave us another piece of paper. Whew!  We were legal now.

The museum was worth the entry fee. There was this one display of something beautiful. 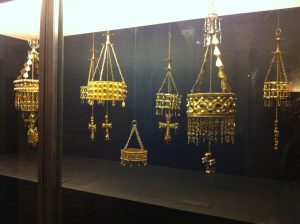 The rest was mainly Spanish signage. I have a hard time following historical narratives in English, much less in Spanish, so I am none the wiser about the Visigoths. 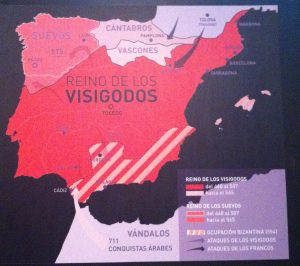