This is a series of posts about Belize and Guatemala that starts here.

Finally, we were all squished into the van and Mark pulled out of the airport parking lot with Jesse in the passenger seat holding a map on his lap. I had expected Mark to use Google maps on his phone or at least a GPS, but he only ever consulted paper maps—and I have to say it made the journey feel more adventurous.

If this had been the USA, or Germany, we would have made our destination in an hour.  But this was Belize, and once we got away from Belize City, the roads were so bad we could only go about 25 miles per hour.

I had experienced bad roads in El Salvador and Costa Rica, but I hadn’t been to Latin America for a decade and I realized I’d expected conditions had improved.  They hadn’t, at least not in Belize.

The houses and other buildings were either half built or half falling apart.  Every surface was faded, rusted, crooked, or flaking. 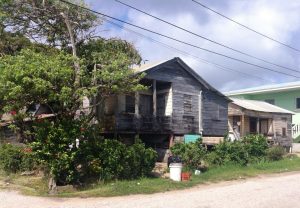 How can I describe the roads?  The word Horrendous fits.  We have potholes in Minnesota due to the freezing and thawing in winter.  They have potholes because the roads just aren’t paved, or they get washed out during the rainy season.  There’s probably no money to maintain them, and corrupt contractors likely factor in, too.

Mark wove around as much as he could to avoid the craters, but that only added swerving motion to the up and down lurching and the side-to-side swaying.  It was like being on a boat in choppy water.

I had foolishly obeyed Mark’s first request for us to get in the van, so I was belted into the far back seat where the motion was worst.

After an hour I turned to him and yelled, “Shut the fuck up!  We can all read!”

No, of course I didn’t. I did it in my head.  I’d like to say I found a direct but kind way to tell him to stop reading every sign, but this was only Day One.  I would be spending many hours in the van with these people.  If I blew my cool right away maybe they would turn against me and shun me.  That would really be a vacation buzz kill.

Later I learned that others had been having the same thoughts. Maybe someone had a word with him, because after the first day it stopped.

We jostled and bounced along the Western Highway, past the Hummingbird Highway to Roaring Creek, the charmingly spelled “Camolote”—a misspelling of Camelot?  I felt heart burn coming on.  I never get heart burn, but I suppose the van ride was doing to my digestive system what shaking does to a bottle of soda.

We passed misty mountains and clear-cut forests.  We passed the towns of Tea Kettle, Ontario Village, Mount Hope, Unitedville, Santa Elena, and finally arrived in San Ignacio, the last town before we turned off for the Crystal Paradise. None too soon, we went into a store to buy snacks, and I quickly got back in the van in the front row.  Much better.  Everyone agreed we would rotate seats, which was very civilized.

We drove around in circles looking for the turnoff until Mark stopped and asked some loitering teenagers if they know where it was.  They did—it was right before the Pepe Sanchez Insurance Agency.

After an early morning flight, a tense standoff at border control, and five hours on the road, we pulled up to the Crystal Paradise at dusk.  We were finally, really “in” Belize.

It really was paradise, at least for this Minnesotan who had left behind snow and cold.

Liz and I were sharing a room and we oohed and ahed over these swan creations, then fell face first onto our beds for a nap. 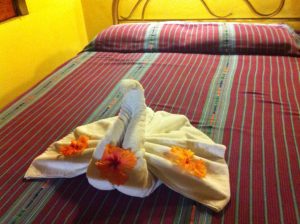