This is a series of posts about Belize and Guatemala that starts here.

This was where I regretted being a cheapskate and buying a rain jacket at the Goodwill.  It looked like a rain jacket and—most important—it looked good on me, but it turned out to be about as waterproof as a burlap bag.

It was raining when we arrived and it rained for the first hour.  And I don’t mean drizzle, I mean full-on, relentless downpour.  I guess this is why it’s called a rain forest.  And this was the dry season.

There were no modern buildings, and only a few sheltered places, like the toilets.  But it wasn’t like I was going to get cold.  It was around 90F, so I made up my mind that it was just water and it wasn’t going to spoil my time in Tikal.

I don’t know what I had expected.  I have been to Machu Picchu and Petra.  Tikal turned out to be similar in scale to Petra but verdant like Machu Picchu, and of course completely unique.  We were there from 8am until 3pm, so I won’t try to retell all the history or describe the structures, society, or ceremonies that took place there.  We walked as José Luis talked, stopping here and there to really dig into something, like this stele: 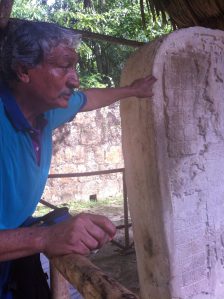 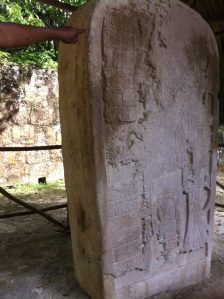 These are some of the structures you may have seen in movies. 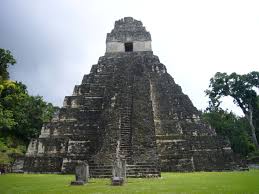 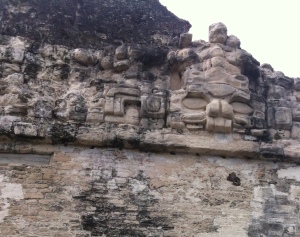 What I hadn’t expected was the amazing flora, especially the tree bark, which called to mind abstract impressionist art. 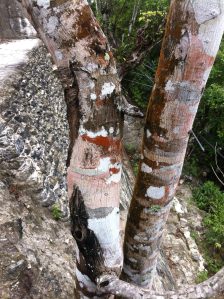 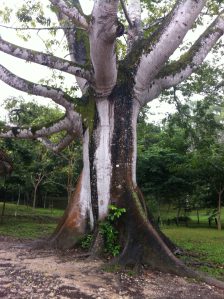 This photo isn’t great, but it’ll give you an idea of how, high in the Tree of Life’s branches, there are air ferns. 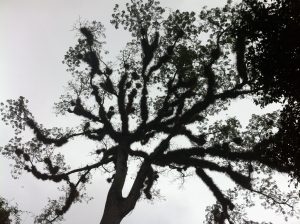 You know, those little plants you can buy in the checkout line at the grocery?

Except that at Tikal, they were as big as tumbleweeds.

“And inside those ferns,” said José Luis, are growing other ferns, and cacti and other plants.  The birds nest in the air ferns and leave seeds in their droppings, which grow into plants.”

So the Tree of Life is host to ferns, which host birds, which result in other plants growing a hundred feet above the forest floor.  It was a “wow” moment. 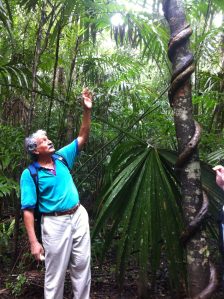 The vine uses the tree to reach the sunlight, in the process killing the tree, and then the vine dies as well.

We stopped at a gum tree and José Luis explained how gum was harvested and the history of Tikal and the Wrigley Company.  I have a piece of gum every day and I knew it had fake sweetener in it but I didn’t know that most gum is synthetic (plastic!) nowadays. [Note to self: research gum that actually contains gum.]

We walked through miles of hill-lined paths, which I thought were unremarkable until José Luis pointed out that the “hills” were actually unexcavated pyramids and other structures that had been buried under centuries of plant life and death. There would never be enough money to uncover all of them, but new technologies like lasers were being used to at least trace their outlines. 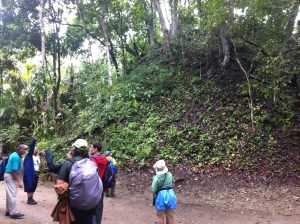 We hiked to the top of one of the tallest structures and again—a wow moment—what a view.  That’s me on the right, a snapped by Stan.  Everyone on the trip was very thoughtful about taking photos of each other, especially of the people who were traveling solo. 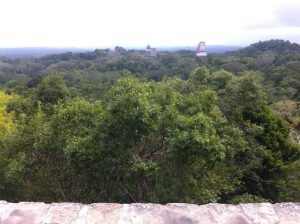 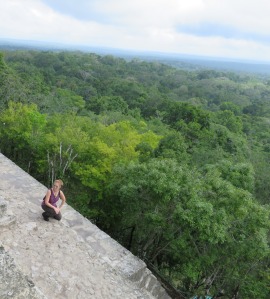 The last stop was the plaza major; there’s no way to capture it all so I plucked this aerial photo off the Internet.

As I wrote in a previous post, Tikal wasn’t a city, but a ceremonial center.  José Luis went into great detail about the sports played here.  They sounded tiresome, but then I am not a sports lover.

It was a very long day, like walking through the biggest museum in the world, a museum without a roof.  I had worried that my fellow travelers who had allergies, illnesses, martyr complexes, and possibly broken bones, would fade long before we reached the plaza, but Tikal’s magic must have sustained them. We rode in silent awe all the way back to Don David’s.