The first night at Jungle Jeanie’s was a long one.  It was hot and humid.  Because our hut was in the jungle and not on the shore, there was no breeze.  My hair turned into a giant fuzzball.  My skin felt soft as a baby’s bottom, but there was no one to appreciate it.

This was also the night that Liz started to fart.  The first time, she did the thing that middle-aged women do—“Oops, sorry! Tee hee hee,” like they are embarrassed.  But then she kept farting and stopped apologizing or even acknowledging it.  I was sharing a small, stuffy loft with her.

I climbed over her and down the ladder to the bathroom all four of us would share for the next four nights.  I sat on the toilet trying to figure out where I could go to get some shut eye.  The hammocks on the beach looked tempting but what about the mosquitos?  Then I heard a thump, thump, thumping and Trudy pounded on the door.  It was no use, I couldn’t say, “I’ll be out in a minute,” since she couldn’t hear me.

I handed the loo over to her and sat in the dark at the table in the center of the room.  Except that it wasn’t dark.  “I’m watching Game of Thrones,” explained Emily from her bed, from which emanated the bright glow of her phone.

“I can’t believe how noisy Trudy is,” I remarked, listening to her clunking around in the bathroom.

“Oh yeah,” said Emily.  “People think deaf households are quiet, but they’re actually noisier than most because they aren’t getting feedback.  They’re always slamming doors, throwing things on the floor, and yelling.”  And farting with impunity, I thought.

She put down her phone and sat up.  We talked for a while, about how she went to Tanzania for college, met her future husband on the first day, and got engaged two days later.  “We’ve been married for 20 years and have four kids, so we had pretty good instincts.  Or we just got lucky.”  She and her family lived a few blocks from me in St. Paul.  They went back to Tanzania to visit his family every year.

Trudy came out of the bathroom and started signing.

“She’s pissed off about the bed,” Emily translated.  “It’s lumpy.  But she’s always pissed off or crabby about something.”

“Are you friends?” I asked.

“No!  We just met in Belize.  Wilderness Inquiry taps a pool of interpreters for these trips, and my number came up.  With Trudy it’s her way or the highway.  I don’t think I’d want to interpret for her on a regular basis.  Of course, she probably had to be hard and demanding to get anything in life.”

Trudy was sitting on the edge of her bed moaning and groaning, which I took to mean that her back hurt.  Liz was snoring up in the loft.

“She was put a home for deaf children in the 50s, when she was five,” Emily continued.   She signed to Trudy that she was telling me this.

Trudy nodded and added in sign, “Yes, it wasn’t a nice place.  They were assholes to me.”

And yet, she had attended college, had a career, married, and had four children.  Her husband had also been an asshole.  She’d divorced five years earlier and had been traveling ever since.

After talking for an hour, I reluctantly climbed back up to the loft.  Finally, around 2am, we all settled down and slept.

Until 5am.  Today was a field trip to the Mayan village of Red Bank to see Scarlet Macaws.  It would involve kayaking and hiking and a picnic lunch by the river.

I waved as they all drove off.  “Watch out for crocodiles,” I whispered sweetly.

I was going to have a Day Off.  I was going to be alone!  I lay in a hammock and read a book, “The Trip to Echo Spring: On writing and drinking,” by an English journalist.  I took a bumpy ride on one of Jeanie’s broken down bicycles with no helmet, brakes, or gears, then napped. 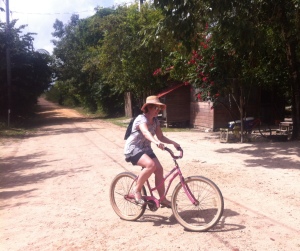