Our last full day in Belize.  The plan was, as the itinerary stated, to “Visit the famed Cockscomb Basin Jaguar Preserve for a guided tour of the jungle. Run by the Belize Audubon Society, the Cockscomb Basin is one of the last refuges for the Jaguar, as well as many other species of birds and animals.”

But first, Mark wanted to go to the nearest large town to get cash, since Jeanie had informed us there was no ATM in Hopkins.  Trudy, Stan, Mark and I went along for the ride to Dandriga, which was half an hour north on very smooth, new roads.

We passed Mennonites in horse-drawn buggies.  They had established farms along the route, and I feel bad saying this but their houses were perfectly tidy, without a board out of place nor a rusty awning in sight.  By contrast, the other houses all appeared to be in advanced states of decay.  Siding was missing, windows were boarded up, anything metal was rusty.  Was this due to the Mennonites having more money? The Mennonites came voluntarily, whereas other Belizeans were brought as slaves or at the very best, subjugated.  Did the Mennonites have some sort of uber pioneer protestant work ethic?

I was about to write “natives” vs. Mennonites, then realized the current Mennonites are just as “native” as anyone else, since their forebears emigrated from Holland in the 17th Century.

We pulled over on the side of the road to watch flocks of birds in the wetlands.  Trudy kicked off her shoes and squashed through the mud.

In Dandriga, Mark reminded us to get $40.00 cash for the airport exit fee.  Mike had some trouble using his card and went inside.

“The teller said we could have gone to their Hopkins branch,” he said when he emerged.  “It’s in a place called Trinnie’s that rents kayaks.”

We decided to wander around Dandriga for an hour. Trudy went back to the van to get her shoes and returned, frantically pointing at her feet.  Without Emily, we had no way of knowing what was wrong.  Mark dug a notepad and pen out of the glovebox.

“One of my shoes is gone!”  Trudy wrote.

“It must have fallen out of the van when we stopped,” Stan suggested.

So Trudy sat in the van.

The first thing you would notice about Dandriga, unless you were Trudy, were the missionaries on the main corner with megaphones, shouting that we are all going to hell if we drank alcohol or fornicated.

Once I heard them pronounce “out” and “about,” I knew they were American, not Canadian.  They were blond and plump and extremely sun burned. If someone did this on my street, I would be seriously annoyed and demand that the police shut them down.  But no one in Dandriga seemed to mind, they just smiled and nodded and kept walking.

All the shops were Chinese owned, with the exception of one Indian place called Jai.

I went into a store called The Price is Right, bought a bag of pecans labeled “For Sale at Costco Only,” and munched on them while I looked around.

There was a large section of glucose products.  Was it cheaper and easier to consume glucose than real food?  The thought made me queasy.

Belizeans apparently inherited a love of beans from their days as a British colony.  These were one-gallon cans.

And in case you spilled beans on yourself, there was a large selection of bleaches.

The prices were marked by hand. Couldn’t they afford one of those price label makers?  I wondered where Koleston Hair Color came from.  The name sounded too close to colon for me.

My favorite item was the Mouse Glue. So many questions….can you also use it to catch elephants?  How does it “kill rat & mouse without poison”?  Do you have to dispatch the poor rodent yourself once it’s helplessly mired in the glue?  What is mocosity and just how strong is it?  How would I avoid stepping in this goo myself in the middle of the night?  And where do dragon hunters fit into the picture? 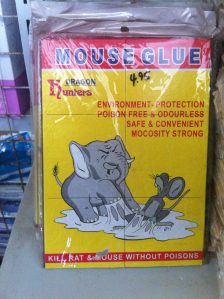