This post will have a lot of photos from our hike up Victoria Peak, the second highest point in Belize.  First, we stood and looked at the map for about 20 minutes. 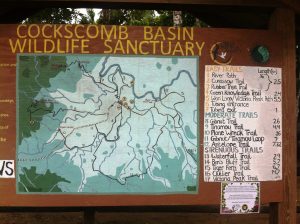 Our intermediate objective was a waterfall where we could swim, but it was listed under “strenuous” and Joan, with her arm in a sling, wasn’t up for that.

“It’s the only way to get to Victoria Peak,” said Mark.  “Maybe you can rest by the falls while the rest of us continue on.”  And that’s what we did.

I’ve done a lot of hiking and I was pretty confident that “strenuous” wouldn’t really be strenuous—that they just called it that for out-of-shape hiking newbies. And I was right; the trail was pretty flat, if uneven. 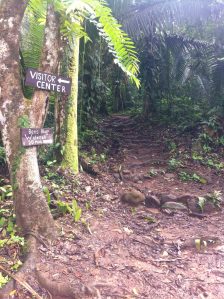 I stopped every few feet to take photos of the plant life.  These are the tiny ones.

Then there were the majestic trees, giant ferns, and braided vines.

Liz and Mike were talking loudly.  Every time I snapped a photo Liz would exclaim, “Good eye! Ah wouldna never seen that.  That’s something I never woulda seen.”

“Oh no you don’t; we’ve got our eyes on you, baby!” Mike replied, with a guffaw that indicated he thought he was being funny.

There is a rule in hiking where the group should never let any member out of sight.  I was falling behind because I was taking so many pictures and because I wanted to hear the birds.  Mike and Liz were justified in keeping me in sight, but I wished they would stop blabbing.

“I wonder why we don’t hear any birds,” Mike boomed.

“I think if we’re quiet, we will,” I suggested.

That didn’t’ work.  They discussed how far it was to the peak and Liz used her pet phrase, “Close enough for government work,” twice.

In the van on the way to the park, Stan had told me about his last two years as a postal worker, learning new software that helped mail arrive from Point A to Point B anywhere in the continental US in two days. It’s amazing when you think about it.

I thought about all the government proposals I’ve worked on that funded rehabilitation for survivors of torture and war trauma. We work hard to be precise, even down to the GPS coordinates of the refugee camps.  But hey, maybe next time I would write, “Just give us the money and we’ll do a pretty good job—close enough for government work!”

We reached the waterfall and half of us stripped down to our swim suits and waded in.  The water was ice cold and refreshing. We frolicked until our sweat and sunscreen and bug spray washed downstream, then put our clothes back on over our wet suits and left Joan on a bench while we ascended to the peak.

The hike to Victoria Peak is not for sissies. It’s steep and long.  When we started, it was hot and humid and our swim suits under our clothes created a personal sauna effect.  Squads of biting insects attacked our ankles and legs.  We re-applied bug spray but that didn’t deter them. 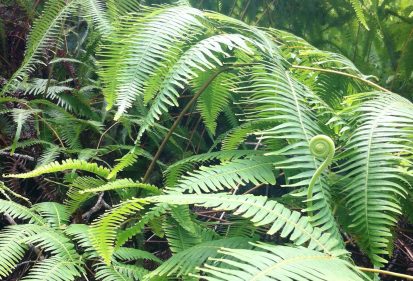 As I staggered up the switchbacks, I caught sight of these tiny, iridescent cobalt berries.

Emily was breathing heavily.  She gave up and sat on a log to enjoy the view while we went on to the peak.

There was discussion of the 13 extra feet we would have had to hike to reach the highest peak in Belize.  Once more, Liz said, “Close enough for government work.”

I turned to Stan and asked, “As a government worker, weren’t you glad you could be sloppy?  I sure am!”  Stan gave a low laugh and edged away from us.  I knew Liz’s digs about government workers had bugged him too but he didn’t want to be drawn in.  Liz squirmed and pretended she hadn’t heard me.

I walked off; Stan took this photo of me with a telephoto lens, contemplating the view.