After coming across two references to Mozart marrying the younger sister twice in one day in unrelated sources, Ingrid and I talked about other eerie coincidences and whether they meant anything.  We didn’t think so, but it was hard to accept that they didn’t.

“So if it is some kind of ‘sign’,” I said, “Of what?  You don’t have a sister.  I have a younger sister—does it mean she’s meeting her future husband right now, and he’s someone I wouldn’t be interested in?”

“Yeah,” mused Ingrid.  “What would be the point of that?”

We talked about Hitler and his siblings some more after turning out the lights.

Ingrid’s voice came from the darkness, “Do you think Eva Braun was a younger sister?”

I groaned.  This could be a night of really weird dreams.

The night was uneventful, but when I woke up, got in the shower, and looked down, I gasped.  My left foot looked gangrenous. Or at least, what I imagined a gangrenous foot would look like from old accounts I’d read of civil war injuries.

The top of it was a dark, ominous green from toes to ankle.  Maybe I’d spilled something green on it?  Nope, it didn’t wash off, and it was very tender.

Then I remembered that four days earlier I had dropped my suitcase on it at the Copenhagen airport while desperately trying to get on a plane to Amsterdam.

That first night, when a green egg had emerged from my foot, my mind had galloped ahead to the dramatic hospitalization, circle of concerned doctors and surgeons (all extremely tall and handsome) surrounding my bed, amputation, learning to walk again in a Dutch rehab unit (preferably in the countryside, with a canal nearby with swans), and of course marrying my surgeon, who fell in love with me because of my bravery and perseverance.  I would not invite my sister to the wedding.

I was so distracted by being with Ingrid and sightseeing that I hadn’t given it a thought since it happened.

I showed my foot to Ingrid, who recoiled, then helped me think it through.

“Can you move everything?” she asked.  Yes.

“Do you have numbness or tingling?”  No.

“Can you feel any broken bones sticking out?”  No.

I have written about Hop On Hop Off buses before.  Sometimes they’re not worth it because in some cities, the streets in the most picturesque part of town are too narrow for them.  Or, like in Malta, they have no signage and you can’t find your way back to the bus stops.

But outside of Salzburg, the HOHO—for around $20—was a fantastic value.  We bought tickets for the Lakes and Mountains circuit and had a splendid day … hopping off and on.

“We recommend you get off at stops seven and nine,” said the ticket seller.

Did we take his advice?  Of course not.  We got off at the first scenic spot, a resort town called Fuschl am See, after Lake Fuschl (pronounced foozle).  It was beautiful, but utterly deserted.  We walked down the main drag and there were no cars, no people, and most distressingly, nowhere to get a cappuccino. 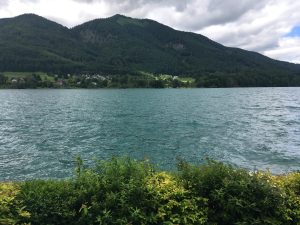 As we walked, Ingrid told me the story of Empress Elizabeth of Austria.  There was a movie made about her life called Sissi (her nickname), and Ingrid thought it might have been made in Fuschl.

Suddenly she stopped walking.  “She was the younger sister.  Franz Joseph was supposed to marry her older sister!  It was all arranged, then he met Sissi.”

“Oh my God!” I couldn’t help exclaiming.  “It has to mean something!”

We walked on and Ingrid told the whole story, which was pretty interesting and which I knew nothing about.  It highlighted for me how limited we are by language.  I can list many of the English kings and queens but my knowledge of European royalty is nil.