My plan was to get a fantastic night’s sleep before flying to Lalibela.  There was no internet, so it was easy to crash early.  I awoke at 3am to a donkey braying. Wow, they really sound pathetic, like they are being squeezed to death in a vise—it’s a cool sound.  I fell back to sleep.

I woke up to a rooster crowing.  It was still dark, so I was mildly irritated but also amused to hear a noise I associate with the country, since I am such a city person.  I fell back to sleep.

Then the chanting began.  It was 4am. Must be the call to prayer, I thought.  Half of Ethiopia’s population is Muslim.  I knew the call typically lasted 10 minutes, so I laid there and listened; if you don’t know the words, it sounds exotic as it wafts from the loudspeakers.  It’s beautiful.

But this call sounded different from other places I’d heard it, like Dubai, Jordan, or Turkey.  It didn’t sound Arabic.  Could they be chanting in Amharic?  It went on for 10 minutes, then 20, then 30.  I wondered if it was a religious holiday as I screwed in earplugs and feel asleep again.  When I woke up at 8am and took them out, the chanting was still droning on.  Mysterious.

I waited on the steps of my hotel for the driver.  The steps were in an alcove, so people walking by didn’t see me until they were right there, then they did a double take.  Ferenji!

I was weirded out that some men across the street were staring at me.

Until I realized they were mannequins.

A young man approached me.  “Seebeetee?”  I smiled uncertainly and said “no thanks” to whatever that was.  He came back a minute later with another guy who said “C-V-T?” My employer.

“Oh!  Yes!” I answered, and hopped into his truck.  He spoke no English.  There was a boy in the back seat who appeared to be about 12.  His little brother?  He spoke no English either, so I sat back and watched the scenery for the hour-long drive to Axum.

The flight was the same as the previous day’s flight—there were muffins and a selection of three beverages.  But you know that background music they play when passengers are boarding a plane?  On this flight they played really loud, schmaltzy music for the whole flight.  I thought about asking someone to turn it off, but figured some of the passengers considered it a benefit.

We landed at the same time as a charter plane of Chinese tourists.  They stared at me—and I mean stared hard—they must have never seen a real white person before.  I hope I didn’t disappoint them.

Maki had arranged for a guide to meet me, Tesfaye.  He had a driver lined up to take me to my hotel, and there were three kids in the back seat.  Did kids just go along for the ride in Ethiopia?

As part of our small talk, I asked Tesfaye about the chanting I’d heard in the morning.

“Is it a Muslim holiday?”

He laughed.  “No, it’s our crazy Ethiopian Orthodox church.  The priests do that every day.”

We arrived at the Tukal Village Hotel. It was so nice I was tempted to tell Tesfaye I would just stay there for the day.  It was a series of “luxury huts,” with a nice restaurant too—and wireless. 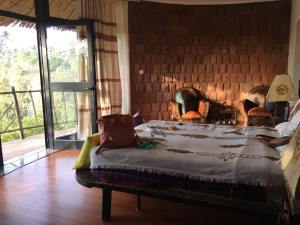 This was the first time I’d been able to get online since Frankfurt.  Maki had told me that the government of Ethiopia had shut down the Internet in the entire country the week before to prevent students cheating on their standardized exams.  Now it was back to its usual state of extremely weak and unreliable.

I threw my things in my hut and Tesfaye and I began a long hike up through the town of Lalibela to the site. “Children will call you ferenji,” he told me.  “People will try to sell you things.  Do not talk to the”

Well then, how was I going to get any souvenirs, I wondered?