I spent two days in the refugee camps.  On the first day I got a walking tour of the camp from the young colleague who had shown such great interest in tiramisu.  He walked at a brisk pace and I managed to keep up despite the ground being muddy and strewn with large rocks and pocked with water-filled potholes.

We stopped in at the Women’s Centre which was run by International Rescue Committee.  We visited a primary school, where little faces looked up at me briefly and then back to their books.  They were probably used to strangers touring the camps. We walked past the playground: 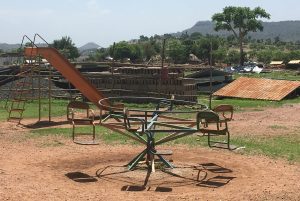 It may look sad, but when you turned around there was this spectacular view of the mountains:

My colleague asked me if I wanted a cup of coffee and I responded enthusiastically.  People had set up small businesses along the main road; some sold beer, some packets of crisps and nuts or single application shampoo packets.  There was a cigarette vendor who sold one cigarette at a time, since no one could afford a whole pack.  We stepped into a thatched hut that served coffee.  I was the only woman and I got a few looks—not hostile or lewd—they just seemed to be noting, “Huh, a woman in the coffee hut.”  Knowing how hard women here worked, I wondered if there was a separate women’s coffee hut somewhere or if they managed without coffee.  Just the thought makes me tired.

We sat on the ubiquitous white plastic chairs, drank bittersweet coffee, and chewed on some kind of beans or nuts.  My colleague’s English was difficult to understand, so as I chewed I wondered if I would soon be seeing flying unicorns.  He talked about being an artist and a project he was working on.  I could croak out a few syllables now, but I didn’t want to be mute while traveling back to Europe in a few days so I mostly just nodded and smiled.

We returned to the CVT area.  There, we have built tukuls that serve as cool, calm oases in which people attend counseling groups.  We’ve got an art therapist from Chicago who is leading the painting of tukuls for children and creating mandalas on others. 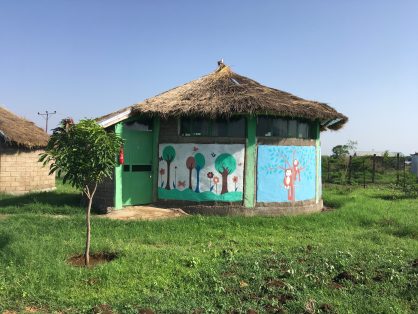 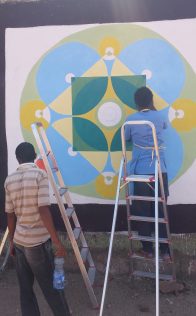 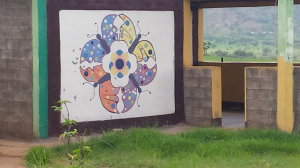 We arrived at break time, so there was more coffee and popcorn with the whole staff of about 10 people.  They insisted I sit on the one (white plastic) chair while they stood or squatted on the ground.  I had been warned about this by others from headquarters who visited—that our staff will insist on visitors taking the chair and that it would be embarrassing.  I had just had an hour-long hike around the camp under a blazing sun.  I was twice as old as all of them.  Age is revered in some cultures and if my age or perceived status as a visitor got me the chair, I wasn’t going to say no.

After the break I was taken to a tukul where a group of 12-14 year old boys was assembled for a counseling session.  CVT’s standard counseling groups run for 10-weeks.  However, if you’ve ever had a teenaged boy in your life you know how restless they can be.  These Eritrean teenagers had picked up and walked out of their country.  They did not enjoy hanging around a refugee camp with no prospects.  As I’ve written briefly about before, many of them walk off again, toward the Sinai Desert in hopes of reaching Israel, or farther on toward Libya and the Mediterranean Sea with hopes of reaching Europe.  Some do make it, but most are kidnapped in the Sinai by Bedouin or other traffickers, or drown in the Med.

Ten-week groups are just too long—many of the boys won’t be around by the third week.  So CVT developed a three-meeting group model, and I was sitting in on the third one.  Everyone had a chair.  But first, they made me stand up and give a speech, since I was such an important person from headquarters.  Now this was a little uncomfortable.  Little did they know that I am nobody special, but I rasped out a few words anyway.