My cough-drop induced discomfort passed, and I turned my thoughts to catching up with work after being out of communications for a few days.  Possum was feeling better on the pain meds, so after obsessively rebooting the router half a dozen times we all walked over the lodge.

The cottage we were staying in was one of about 20 cottages surrounding a big central lodge with a dining room, pool, game room, and so on.  This was where the front desk was, and this was where Possum and I demanded action while Lynn sat at a discrete distance, cringing at our combined American and Australian demands for action.

We’ve all been there: promised something that doesn’t work, facing a customer service person who can’t or won’t help.  Different people approach it differently. In general, I think Americans and Australians believe we can fix anything! if only we demand action loudly enough and refuse to give up and go away.

After politely badgering a series of women at the desk, we came away with four theories ranging from sinister to silly: 1) the owner of our cottage hadn’t set up the router correctly, 2) the owner of our cottage had set up a router even though there was no Internet, then falsely lured people to the cottage with a promise of wifi, or 3), a storm had knocked out the Internet to that particular cottage three weeks ago and the owner hadn’t fixed it.

Bottom line, no Internet.  “It’s just not very good here in the best of times,” explained one young woman.  “We’re so remote.”

I had expected to have lousy Internet in Ethiopia, but in England?  But it made sense. If I go to northern Minnesota, to the Boundary Waters Canoe Area we share with Canada, there is no 3G or even cell phone service.  There are probably large swaths of the western states like North Dakota and Nebraska that don’t have Internet.

Bottom line, we were allowed to log on to the lodge’s account.  The catch: we could only get a connection in the lounge, where holidaymakers enjoyed their G&Ts, raucous hen parties took place, kids ran through in wet swim suits on their way from the pool, women in lycra workout gear strutted through to get to the yoga studio, and MTV blared on multiple big screens 24/7.

But before work came pleasure, and we had a wonderful first day.  The weather was fine and we went to one of the places on my bucket list, the Lost Gardens of Heligan, near Mevagissey.  Heligan was an 18th Century estate that fell into ruin after World War I and has been restored to its splendor.  There’s the stuff you expect in a botanical garden, like glass houses and lots of gorgeous flowers. 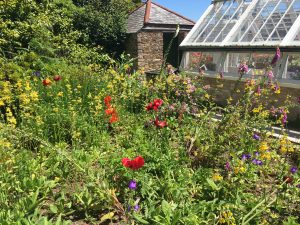 There were loving memorials to the servants who made Heligan tick in its heyday—supplying everything from pineapples to honey to beef to the household—and who were decimated by World War I.  This is the plum room, with a photo of its tender who died in the war. 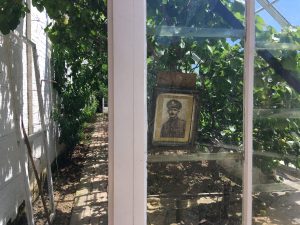 There was even a memorial in the Thunder Box, which was an outdoor toilet for servants.

There are also extravagant sections like The Jungle, which is … well a jungle.  In Cornwall.

There are hidden confections like the lying lady and the shady lady.  I hope you can spot them. 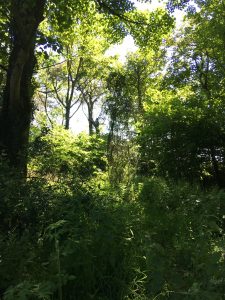 We got back to the resort in time for an important call I had about the proposal to the UK.  I staked out a table in the far corner of the lounge and got ready to Skype.  Oh, no.  A DJ arrived, set up, and began projecting videos on the wall above my head.  It was Disco Karaoke Nite! The Pet Shop Boys’ “It’s a Sin” started throbbing at a deafening volume.  People around me were drinking and laughing and yelling BINGO! and having a great time.

This was the beginning of my remote work experience.  This was it; this was where I proved to my employer that I could show up for meetings on Skype, respond to emails in a timely manner, and produce proposals as usual, no excuses.