On to our final stop, Shaftsbury, via Sherborne.  I love its Wiki description:

Sherborne is a market town and civil parish in north west Dorset, in South West England. It is sited on the River Yeo, on the edge of the Blackmore Vale, 6 miles east of Yeovil. The A30 road, which connects London to Penzance, runs through the town.

Sherborne has a famous Abbey, the exterior too big to capture in a photo, but here is the interior. 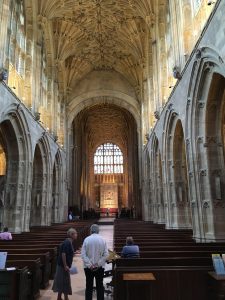 A man was singing snippets of songs to test out the acoustics, which were great.  In fact, the elderley woman giving him and his wife a tour declared,  “Aren’t they orgasmic!” and this word rippled throughout the church.

This gate is carved out of wood. 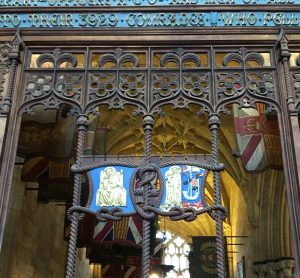 There was the usual tomb of a dead 16th Century couple who may have founded or rebuilt or otherwise bankrolled the abbey; I don’t recall their names and sadly few other visitors will, even though the final resting place they splashed out on is so magnificent. 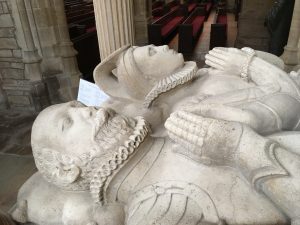 There was this more modest tomb containing six people, including children who died at 50 weeks and three years and someone’s 16-year-old wife.  You wonder if anyone in town lived to a ripe old age, which back then would have been about 40. 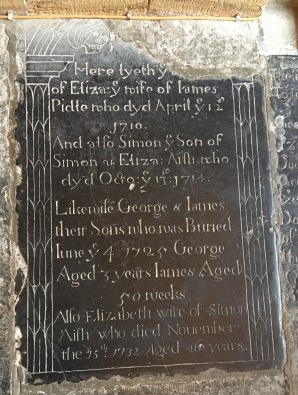 There was this splendid fellow on a monument out front, and a beautiful wrought-iron gate which was marred by a modern sign posted next to it which said, “No Dogs, No Cycling, No Ball Games.”  This was according to the Ecclesiastical Court Jurisdiction Act of 1860 and meant to protect “this consecrated ground.” 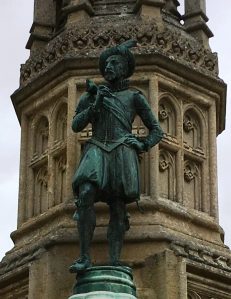 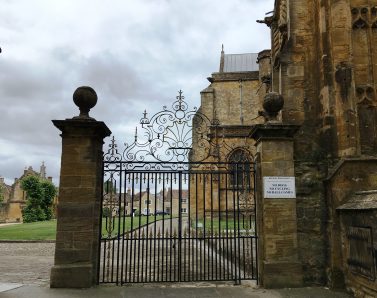 There are thousands of churches and abbeys and minsters and cathedrals in the UK.  Fewer than five percent of English people attend church.  The figure is almost nine percent in Scotland, but still much lower than the 38% of Americans who attend church on a weekly basis.

I’m an atheist Jew who loves old churches.  You don’t need to be a fervent believer in Jesus to feel uplifted—if not orgasmic—by soaring vaulted ceilings, stained glass, and all the history embodied—literally—in tombs.  I always drop some coins in the donation box.

Sherborne itself was a pretty town, with some well-preserved half-timber buildings. 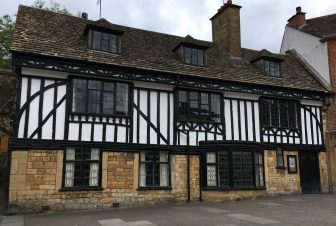 And a gorgeous building that I believe was formerly some kind of monks’ residence, now converted into luxury flats, complete with signs that warned, “Private Property, No Entrance.” 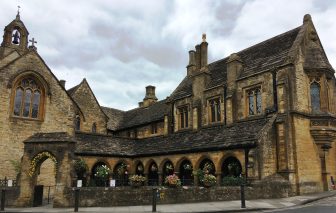 And adjacent to the parking lot, this classic scene: 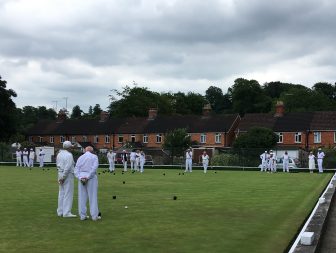 There are two Sherborne castles—“old” and “new.”  We stopped in the National Trust office to ask directions and walked off clutching maps.  We were soon leaving town on a narrow road with no sidewalk.  One sign early on pointed to the castle, then there were no more. We walked and walked.  A high wall on one side of the road prevented us from seeing what might be on the other side and the road had curve after curve which prevented us from seeing what was ahead.  It was high noon on a hot day.  We stopped in a shady spot for a rest.

“Do we keep walking?” I asked.

“It could be just around the next bend,” Lynn replied.  “Or we could be completely lost, as usual.”

“Yep.  I’m hungry.  Let’s give up and go to that historic pub the National Trust lady told us about.”

“Okay … but if we can’t find a castle don’t get your hopes up about finding a pub.”

We managed to follow the directions and find two other pubs.  No one had ever heard “Sherborne’s Oldest Pub” promoted in the tourist office and on the map.  Every English town has a pub called The George; we had lunch there.  I had a steak and kidney pie with a pint and Lynn had a fish pie with a ginger ale.

Here he is, cut into the turf and filled with chalk.  Saxon god?  Political satire?  Teen prank?  The story is unknown but most agree he dates to the 17th Century. 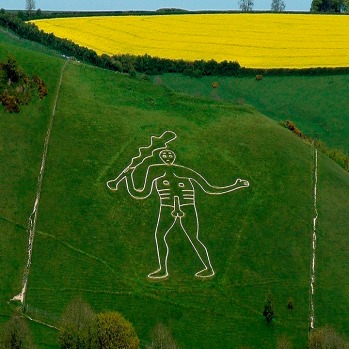