Once I knew I was going in the right direction, settled back and enjoyed the lovely landscapes along the route.  The word “sweet” comes to mind when I gaze out over the English countryside.  That may sound patronizing but it’s not meant to be.

If you like rugby you will probably want to put Twickenham on your bucket list.  I made a mental note to avoid it on game days. 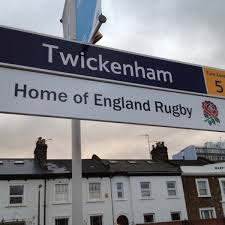 As we rolled into London there were some great views.  For once I have an excuse for my poor quality photos—taken from a moving train. 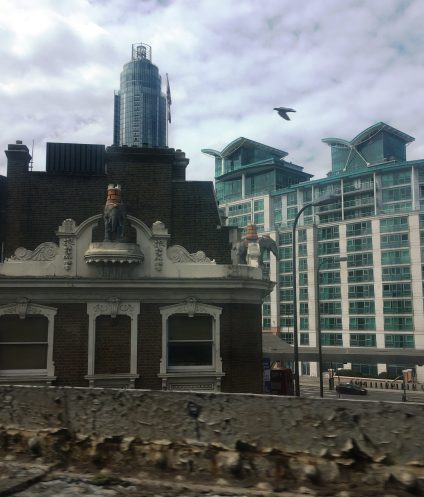 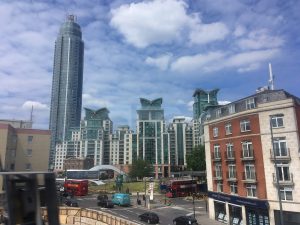 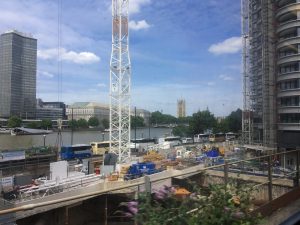 Waterloo would be my toilet stop every time I came into London.  This sign was still in place a month later, so “as quickly as possible” really meant, “someday, maybe.” 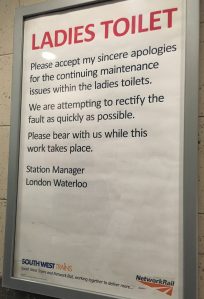 The sign made it clear that your 30p got you one visit to the toilet.  I wondered if someone had sued them, insisted they had bought a lifetime pass. 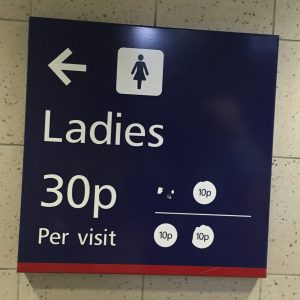 Then I was on the underground, which whisked me under the Thames toward Canary Wharf, where I would exit and try to find my meeting.  I was anxious about finding the building.  What if I took the wrong exit out of the tube station?  What if I got turned around?  They had sent me a map, which was even more out of focus than my photos and really just a jumble of unhelpfulness. 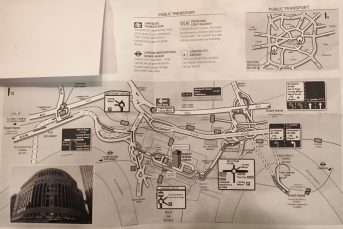 It showed a picture of the building, but how would I find it among all the other buildings?

The first time I came to England, 30 years ago next year, I had stayed somewhere in the vicinity of Canary Wharf.  Then, it was all gritty warehouses, Pakistani immigrants and elderly Holocaust survivors and native English speakers whose English I could not understand; street stalls selling tiny apples and pet goldfish suspended in plastic bags and possibly dodgy cassette tapes by Billie Ocean, Bananarama, and New Order.

Now it looks like this, according to a local news site: 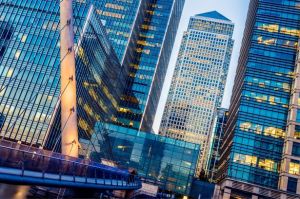 I stepped out of the tube station and saw this: 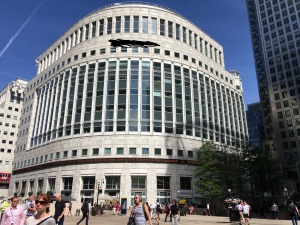 Of course it didn’t have a giant black squiggle on it but you get the idea.  When will I ever learn to stop worrying and trust that I’ll be able to find things, especially when I have a map and a photo of the building?

I had dressed and accessorized carefully, making the best of what I had.  I had bought a really cute top in Cornwall that was suitable for a country holiday and I thought I could make it work paired with dress pants, my good jewellery, and an up do.  I felt professional when I left the house.  When I entered the building I immediately felt like a schlumpy schlimazel, which is just what it sounds like.

I waited in the gleaming lobby furnished with sleek Danish modern furniture.  I was sure the water glass the attendant handed me cost more than my entire outfit.  The reading selection on the table included The Financial Times, Economist, Wall Street Journal, and International Business Times.  All the headlines were about rich people making deals that would make them richer.

I noticed my heels were a bit worn.  Note to self: Buy new shoes before next work meeting.

One of the people I was meeting with arrived.  She was 30 years younger and 30 pounds thinner than me, blonde, and dressed in stilettos and a killer designer outfit. Mercifully, it was all over in 30 minutes.

I have been to meetings with foundations and corporations.  I’ve been to Ford and Open Societies Foundations in New York.  At Chiron Corporation in Silicon Valley.  And so on.  I normally carry myself well in these meetings and I had come carefully prepared.

But then I spilled my water and as we were wiping it up, my nose started running like a garden hose and I had to ask them for a tissue and blow my nose in front of them. These people were lawyers and I don’t know if they were on the clock but they were clearly impatient and possibly appalled by me.  I managed to maintain my dignity, make my points and ask my questions, but I was relieved when the revolving door swung closed behind me.