I went shopping the day after my meeting debacle.  The UK is not a cheap place to live.  The Sales were on for the summer holidays, but things were still “very dear”, as they say.  For instance, a pair of black leather ballet flats cost £80—on sale.  When I worked for Oxfam years ago I was paid in pounds, which helped.  But now I had an American job that paid in dollars, so those shoes would have cost me $105.

My usual shopping strategy is: Go to every store in town, look at every item in every store, buy nothing, go home. Sometimes I buy things but then for one reason or another most of them have to be returned.  It was going to be extra hard to make decisions here.

Also, it seemed like English women must have smaller feet than me, because my size shoes were in the section that, in America, very large tall transvestites would have shopped.  Bras were the opposite problem.  The bra cups on offer were big enough to fit over my head.  Not that I did that.  At least not when anyone was looking.

I looked in Cath Kidston, almost as a joke.  I love her stuff but a little goes a long way and as I already knew, country flowers weren’t a good work look.

I bought a phone case and some pajama bottoms patterned with guinea pigs having birthday parties.  I resisted the flouncy guinea pig skirt.

Next I went to TK Maxx, which is called TJ Maxx in the US.  Still expensive and hard to find anything that worked.  Then I hit rock bottom and bravely walked into Primark, which is dirt cheap with quality to match.  Because it was the sales, the store was packed with teenagers and their mothers and clothes were strewn all over.  The clothing was adorable but if I even had to ask myself, “Would this lacy, skin-tight, fuchsia, sequined, leopard patterned hoodie be appropriate for my next work meeting?” I had my answer.  I bought a pair of pink satin ballet flats for £6.  Not exactly work attire but I couldn’t resist.

The queue was 25 people deep and Justin Bieber was bleating at an ear-shattering volume on the overhead speakers.  I ran out of Primark like I was being chased by a velociraptor and started to hit the thrift stores, which they call charity shops because well, they are all run by and for charities.

Oxfam has 650 shops in the UK. They stock second hand clothes but also new stuff from around the world like beaded bracelets made by Kenyan orphans, organic Palestinian olive oil, and cards designed by blind tribal elders in Nepal.  It’s all beautiful stuff, and I bought some cards and a pair of socks knit in Bolivia that were guaranteed not to fall down.

I hit Age Concern, British Heart, Save the Children, and Mind, which is a mental health charity.  Second hand clothes in the UK are really rubbish. I don’t know if someone skims off the cream and sells it on EBay before it reaches the charity shops, but they are full of sweaters with stretched out sleeves and 1980s jungle print dresses.

The Thames Hospice shop specializes in vintage. I spent an hour in there and left with a pair of vintage shoes that were too small, a pair of shoe stretchers, and horse brass, which is useless but I like how it looks on my wall. 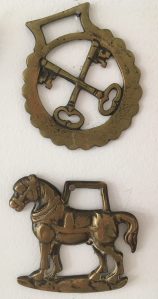 I bought the ship, which has a useful hook, in Amalfi, Italy.

None of this was going to impress in my next work meeting except maybe the shoes, if I could stretch them out a couple sizes.  Once I inspected closely, however, I discovered they were not vintage at all but in fact made of plastic.  They would have to go back to the shop, along with the shoe stretchers.

Eventually I discovered Daniel, a department store with only beautiful, high-quality things. 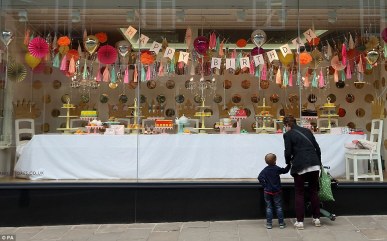 I went in several times to fondle the cashmere sweaters, drool over the shoes, and try on hats.  Eventually I bought some things, using the time-tested rationale, “I deserve it.” And ya know, maybe I did.