I set my alarm to ensure I would wake up in time to catch my 9am bus.  I’m such an early bird; there was no way I was going to oversleep, but just in case.  I collapsed into bed at 10:30 and woke with the alarm at 8am.  I guess the previous day had been a long one—starting out in London with a couple tube rides, finding and catching the coach, sitting for three hours on the coach with nothing to do but look at the beautiful landscape, hiking four miles across open fields in the hot sun, “doing” Stonehenge, “doing” Amesbury, and capping off the day with a “meal” at Little Chef.

I flipped on the TV while I got ready.  There was a long news segment about how to survive a terrorist attack whilst on holiday.  When they got to the end and quizzed the viewers, I yelled my answers from the bathroom.

“What should you do if you see terrorists invading your hotel from your balcony?” droned the guy in the suit who was an ex-marine-cum-highly-paid terrorism expert.

“Hurl your Margaritas at them!” I yelled. 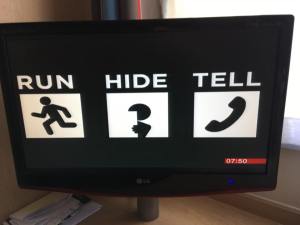 I got that one wrong. “What should you do if you if terrorists invade your hotel room?”

“Cover your head with both hands so they can see you are unarmed!” I yelled.

I got it right!  I wondered why the woman was wearing nurses’ scrubs if she was on holiday.

To my surprise, I got most of them right.  Watching that security webinar for work had really paid off.

I was soon out the door of the Travelodge and on my 10-minute walk to the bus stop.

Does this ever happen to you?  You’ve visited an amazing place like Stonehenge and as you leave you think, I’ve seen Stonehenge, now I’m one World Heritage Site closer to death.

Or even just leaving an unremarkable place like the Travelodge, do you ever feel like you have to break some sort of surface tension in order to leave?  I will probably never be here again.  Why do I care?  Why do I have to exert myself to leave?  It’s a cheap motel!

Of course I did leave, and after I crossed under the motorway I saw on my left a place called The Lord’s Walk.  I had passed this five times now.  It looked so inviting.  To walk through cool woods along a stream would be refreshing after the hike of the previous day.  It looked like my kind of paradise. 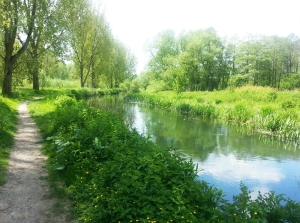 I read the placard.  It was the Lord as in “Lord of the Manor,” not as in “the Lord God.”  The local lord had gifted some of his land to the local populace and they had done a beautiful job of making it available to all for walking, fishing, picnicking, smoking pot, and so on.  I imagine few tourists go there because they are all focused on Stonehenge—or anxious about catching their bus.

I could have taken a short walk with the lord.  I had 45 minutes before the bus was due.  But I walked on.

Amesbury, and the southwest of England in general, are full of walls and buildings covered in what Lynn had informed me was flint knapping. Here are more images if you’re a rock hound. 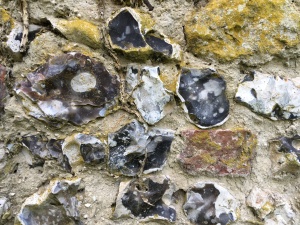 We joke about artisanal products made by bearded millennials these days.  There is a guy in Minneapolis who is dead earnest about his artisanal flour, which costs $20 for a five-pound bag (that’s a lot).  I’m sure it’s very fine flour.  I don’t know much about flint knapping, but I met a guy once who was a dry-stone wall expert.  I would call both of these trades artisanal; it must take years to develop the eye and the skills to maintain these old structures.

At the bus stop, I felt anxious I was at the wrong stop, even though the taxi driver had shown me this stop and there were people with suitcases milling around, obviously London bound.

On the bus, I felt grungy, but content.  My phone connected to wifi immediately and there was a message from Heidi, “Let’s go to the continent!”