I was on my way to Oxford.  This involved taking the train into London, then boomeranging out to Oxford by coach.  I had taken both routes many times so I felt no anxiety about getting there.  From the train I could see Battersea Power Station. 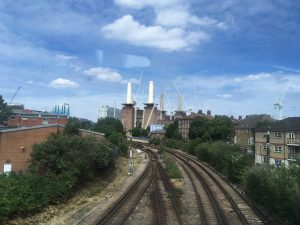 When I first spotted it, I thought I recognized it from somewhere.  After a couple more trips it came to me—this was the scary structure featured on Pink Floyd’s album Animals, which I had listened to over and over in my youth.

Animals is loosely based on George Orwell’s novel Animal Farm.  It’s the debut of the pig that Roger Waters, the band’s former bassist and lead song writer, still features in his concerts.  The album critiques the socioeconomic conditions in late 70s in Britain, with the pig symbolizing despotic, ruthless capitalism.

This is one of those moments where I feel overwhelmed and amazed by coincidences and connections, but I’ll write on.

Battersea Power Station was decommissioned in the late 70s and early 80s.  It looks ominous and cool from a distance.  It took me back because my first day at Oxfam involved a group “field trip” to another coal-fired power plant in Didcot, a half hour south of Oxford.

Yes, my first day happened to be an “away day,” which we in the US would call a staff retreat.  It was disorienting, to say the least.  Here I was, ready to start researching issues like small scale agriculture and industrial mining, and instead my new boss picked me up in front of the liquor store near my hostel and whisked me away to a coal-fired power plant.

This is what it looked like as we approached.

All I could think was, “What the fuck?!  Maybe we’re really on an undercover mission to sabotage it.  I could be deported on my first day!”

But no, we were really going on a tour.  The Didcot plant has also since been decommissioned and transitioned to natural gas. Sadly in the process, part of it collapsed and four workers were killed.

But back in 2006, the management was in full marketing buzz-speak mode.  We got to don jump suits and hats and masks; we must have looked like the Oxfam version of Devo.

We were lead around by a perky young woman who made coal power sound so cool! and really—just super for the environment! We received cardboard model coal plants to assemble at home with our children.  These actually were really cool.  I wonder whatever happened to mine.

I never received a clear explanation of why we went.  Maybe to try to understand “the opposition?”

Back on the train to London, seeing Battersea reminded me that there was a Pink Floyd exhibit at the Victoria and Albert Museum.  Strangely, my son is a bigger Floyd fan than I ever was, and I made a mental note to go check out the exhibit in order to obtain Cool Mom Points.

Now, sitting in my living room in January in Minnesota, I am reading Donald Trump’s tweet about Nine Elms, the area where Battersea is located.

“Reason I canceled my trip to London is that I am not a big fan of the Obama Administration having sold perhaps the best located and finest embassy in London for “peanuts,” only to build a new one in an off location for 1.2 billion dollars. Bad deal. Wanted me to cut ribbon-NO!”

An off location?  I read several articles about the redevelopment of Nine Elms and specifically Battersea Power Station when I was in the UK.  The plan is to invest £8 billion ($11 billion) into Battersea to create luxury penthouses.  $11 billion!  Yes, billion!  There are all sorts of other fantastical buildings springing up around Battersea, including the new American Embassy.  This is an artist’s rendering; the real thing was more impressive, although I didn’t know what it was when I saw it in the distance from the train. 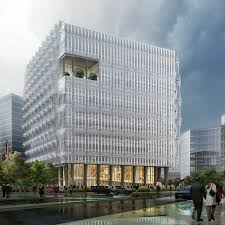 This kind of phantasmagorical development project should be right up Donald Trump’s alley—affordable only to the one percent.  I’m surprised he doesn’t recognize a great real estate investment deal when he sees it.  I’d invest in it if I had his money.