My sappy, sentimental life review of my idealized time in Oxford was wiped away once we got into town.  The road was torn up for construction and blocked off with blaze orange barriers.  The bus would take a very long detour, so I jumped off early.

I walked across east Oxford, noticing for the first time how shabby it is compared to Eton and Windsor—with derelict buildings, front gardens full of weeds and rubble, smeared dirty windows, and gum and spit and trash on the sidewalk.  They call cigarette butts fag ends, and there were loads of them.  It had all seemed exotic when I’d first arrived.  Now it just looked ugly.

East Oxford, as you may have guessed, is the sort-of east side of Oxford.  It has a distinct personality.  East Oxford is where people can still afford to live.  It’s home to immigrants and students and transient people like me who come to work for Oxfam or the Mini factory in Cowley, beyond East Oxford.

Cowley Street, which runs through East Oxford, bustles with small shops selling everything from books to buckets.  There are Bengali groceries and halal fried chicken fast food restaurants. 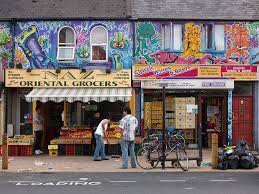 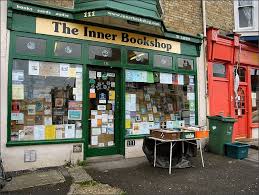 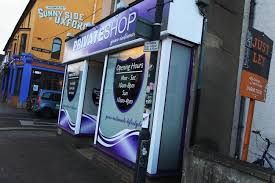 Lynn was in town too and had booked a room at a guest house on the Iffley Road.  My plan was to swing by there, drop my bag, then spend the afternoon having a wander until meeting her and Possum and a guy named Andrew for dinner at an Italian restaurant in St. Clement’s Street.

Lynn was at the guest house when I arrived and we chatted a bit, then she went off to Oxfam.  The guest house was serviceable and dirt cheap, for Oxford.  It had what is so hard to find in the US—a room with three beds—two singles and a double.  If Possum didn’t have her own flat, there would have been plenty of room for us all.

Those of you who have been reading this blog for a while know I don’t write restaurant or hotel reviews.  There are plenty of people willing to do that, and I just like to tell stories.  I do remember thinking at the time that the bath in this place was pretty grody, that the bare walls could use a coat of fresh paint, and that the coffee at breakfast was barely drinkable.

Looking back six months later, I had to work to recall those details.  What came to mind right away was how good it was to see Lynn again, how fun the dinner was, and the sense of mastery I felt navigating my way around Oxford on the bus and meeting people in three locations in one morning.

I also have to work to remember how hot it was.  Our room was on the third floor and as is common in the UK, there was no AC.  Opening the window resulted in a flood of traffic noise from the busy road below.  But again, I have to work to remember these things that bugged me at the time.  I guess that’s a sign that I don’t hang on to these passing irritants.

I walked over to the Cowley Road and caught a bus into the medieval city center.

Sitting in a top front seat on the double decker bus, I found myself getting sentimental again as we passed Magdalene College (pronounced “maudlin”), then Brasenose College, and on into the High Street, which ends at Carfax Tower. There’s a reason so many TV series and films are set here. 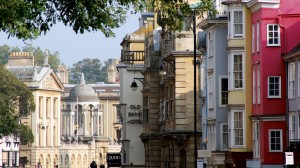 Oxford University is made up of 38 colleges.  Some are open to tour often, some never, some only on Tuesdays during a full moon. If there is any “system,” it is a mystery to me.  I feel lucky to have seen half a dozen of them.

Ten seconds after alighting from my aerie on the air conditioned bus, it all came back to me—the heat, the smells, the sidewalks packed with oblivious tourists taking selfies.

I slipped down a narrow passage to the Turf Tavern, got a pint of Old Rosie Scrumpy, a cider beer, and slid into a booth by a window. 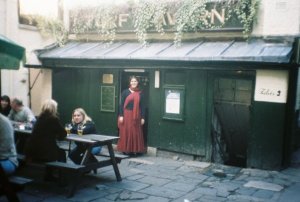