I joined Lynn and Possum and their friend Andrew for a long dinner at the Italian restaurant.  Andrew was a former Oxfamer, now a finance consultant.  He was preparing to walk along the south coast of England to raise money for Oxfam, and we ribbed him about the impending stormy weather.

He laughed back at us, Ha, ha, I’m going to Italy for a week after the walk.”

The organization I work for supports survivors of torture and war trauma to rebuild their lives through counseling, physical therapy, and social work services.

You might think torture is a rare occurrence, but it’s not.  Governments all over the world employ it to scare their populations into submission.  My own government has tortured people it suspects of being terrorists.  My organization estimates that about 1.3 million of the refugees in the US were tortured in their home country.  And there are likely tens of millions more in other countries.

One way for us to reach more people is to work with other organizations, and that’s why I had come to Oxford—to meet with some people about possibly partnering with Oxfam.  Oxfam is an international organization that started in Oxford, and the largest branch, Oxford Great Britain, is there.  OGB dwarfs my organization.  It had income of $565 million last year, compared our income of about $15 million.  Was there some way we could go in with OGB on funding applications, doing a small part of a big project?  It could make their proposals more competitive to add our specialized services, and we could reach more survivors.

That’s the theory, anyway.  It takes a long time to bring these partnerships to fruition, if they ever do.

I had meetings the next day in three different locations.  When I asked the driver of the #8 bus to Headington where I should get off, he gave me a rude and incorrect answer.  I ended up walking about eight blocks in the warm rain.

I still arrived early, so I did reconnaissance for how I would catch my next bus, and then looked at ads in an estate agent’s window.

This one is pure Oxford: 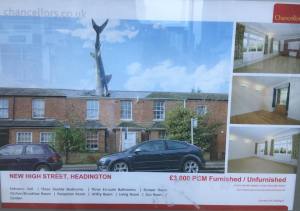 Yes, the house comes with a giant fish sculpture.  What’s so excellent and British is that there is no reference to it in the ad.   Entrance hall?  Check.  Three bedrooms, check.  Living room, yes.  Garden?  Yes.  Giant fish? Huh, what fish? Pay no attention to that fish plunging through the roof.

I found the coffee shop and had a lovely talk with a woman who worked for OGB for 17 years and is now a fundraising consultant.  Her two young children played quietly while we talked NGO-speak.

“Which sector are you under?” she asked. “Health, GBV, protection?”

“Usually health but with PRM we’ve been protection and also with this DFiD NOFO we’re responding to, and we’re thinking GBV for Iraq with OFDA.”

“That makes perfect sense,” she nodded.

It was nice to talk to someone who spoke the same code as I do.

I next boarded the #10 bus, which wound along Windmill Road, which turned into The Slade, then Holloway Road, then Between Towns Road.  I alighted at The Original Swan pub, from where I would walk to OGB.  I had walked this route every day when I lived here, but today—when I was running a little late—I got lost.

OGB is in a business park where all the buildings look alike and are arranged in a circle so you can go around and not realize you’ve gone around.

It’s a nice office park, as such places go.  There are fountains and trees.  But there are no signs or directories, or I missed them.  I was so sure I would remember the route, but I didn’t.  After my disastrous meeting in London I had invested in some big-girl professional work clothes and now they were damp with sweat as I huffed along.  I tried to ask directions from three passersby and they looked at me like I was insane and scurried off.