Dunrovin House.  There’s so much to say.  So much history.  Mysteries like, “When was it built?” and “How many additions have there been? and “Why is there that faint line on the wall—was that where the original house stopped?”

Was it originally a fortified outpost? It’s set down in a depression; below is a view from the ground-floor kitchen.  Four or 500 years ago, was the ground close to the house even lower, and filled with water?  Lynn and Richard think the original structure was built in the 16th Century, so there’s really no way of knowing these things without spending a lot of time in musty archives.

One day Lynn, Richard, Lord Parker, and I visited a nearby ruin, Glenbuchat Castle, that Richard had heard had similar features to Dunrovin.  Had it been built at the same time, for the same purposes, by the same people?  We didn’t learn anything because it was closed for renovation.

Contrasted with Glenbuchat, which sits cold and empty at the top of a windy hill, Dunrovin is full of life and color. These are a few shots of some of the 24 rooms. 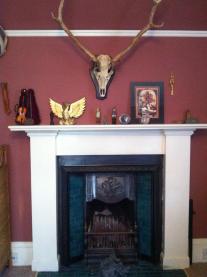 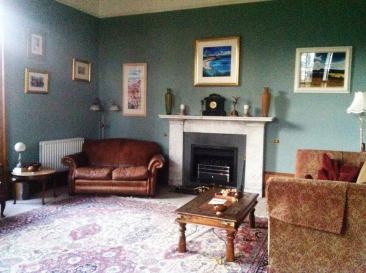 On five levels, there are all the usual rooms you expect to find in a house: bedrooms, bathrooms, kitchen, dining room.

Then there are: a sitting room, music room, library, great hall, butler’s pantry, parlor, conservatory, and a gun room.  The gun room is required to be locked at all times and only Richard, the registered gun owner, may have a key.  So I’ve only glimpsed inside it.

Many of the rooms had original functions that don’t make sense anymore, like the school room, so they are now used for other purposes.

These call bells in the kitchen provide a list of the rooms in the late 19th / early 20th Century.  There was a Morning Room—whatever that was—maybe where they caught the morning sun and working on correspondence?

The bells were disabled by a family who lived here in the 80s who had four boys.  I’m sure it was funny the first time one of them rang a bell to summon their mother to bring cookies to them in their attic bedroom, but like her, I would have grabbed the wire cutters pretty quickly.

Lynn and Richard have filled the place with antiques and art and artifacts.  They’ve managed to be true to the historic character of the house without making it stuffy, which is always a danger with old houses.

Dunrovin has the things that, in my mind, make a house Scottish—lots of heads on the walls, a fireplace in every room, and a tartan door.

The door, covered with the cloth of the Gordon family tartan, separates the front of the house from the back.  In the Gordon family heyday, the family would entertain in the front-side rooms, which have 20 foot ceilings and views of the hills.  Behind the tartan door, the help would be running up and down from the kitchen or using the dumbwaiter (below) to move food and libations up to the first floor butler’s pantry to be staged for serving.

There is this defunct system for communicating throughout the house.  Now everyone just yells, or bangs a gong in the hallway to announce that supper is ready.

I love this wallpaper in what is now the entertainment room.  Richard, who is the main decorator (“Ricky’s Decoratin’ at yer service” he deadpans), has found such scraps of William Morris wallpaper behind fuse boxes.

See how deep the windows are.  Thick walls are meant to keep out the cold.

The fireplaces are ornate wrought iron or tile and burn wood or peat.  I spent many evenings on the floor in front of this one, with a great fire, a lap cat, and a glass of wine to warm me while we watched Dickensian.

This may sound odd, but for me the one item that says “country house” is an Aga.

More about stoves in the next post, but an Aga is like a fireplace but it’s always on.  Everyone hangs out in the kitchen anyway, and on cold days we are all drawn to lean our back against the Aga.