“I have to stop at Raeburns to order for the summer party,” Lynn said.  So we drove down a street I hadn’t seen, passing a bakery and confectioners that didn’t look as though it had sold anything since 1968.

There was a lovely vacant building built in 1907; apparently the last failed business to give it a go there had been appropriately named Bygones.

The one bustling business was this one.  At first I thought it was a mobile e-cigs vendor, but then I realized there was a tobacconist storefront and the owner had slapped this sign onto his van out front to ensure no one missed it.

Then we were at Raeburn, the family butchers.  That doesn’t sound right.  It’s a family-owned business.  Lynn asked what meats she could order in quantity for BBQing at the summer party, and the lad behind the counter answered her.  Or at least I assumed he was answering her, because I couldn’t understand a word due to his accent.

Thanks to Richard being a mighty hunter, the freezers at Dunrovin were full of carcasses so we had no need for these. 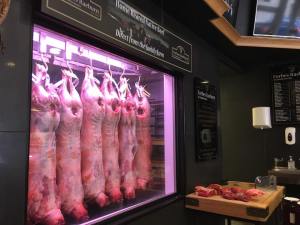 I gazed into the cold case.  I haven’t eaten pork in 40 years, but I appreciate the time and skill it takes to produce things with “home” in the name.  You know what bacon is.  In case you aren’t familiar with black pudding, it has nothing to do with dessert.  I find pudding to be one of the most confusing words in the British Isles. Black pudding is a sausage made of congealed pig’s blood.  Mealies aren’t worms; they are some kind of sausage. 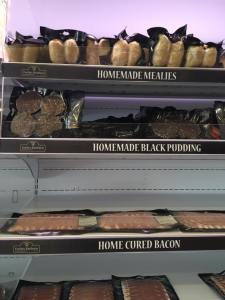 Lynn placed her order and bought some steaks and chops and hamburgers for the three of us for a BBQ whenever the weather cooperated.  “Not sure what I ordered—I couldn’t understand a word he said!” she exclaimed.

“How are the charity shops here?” I asked as we drove past a couple on our way out of town.  This was Minnesota-speak for, “Let’s stop and shop!”  But Lynn is good at not getting my Minnesota hints.  It had been a long day, there would be another time.

As I write about my idyll in the UK, Oxfam is being slaughtered. Unless you live under a self-imposed news blackout (I wouldn’t blame you), you will have heard that Oxfam, Britain’s 4th-largest charity and one of the biggest international development organizations, has been under fire for employee sexual misconduct in the wake of the 2010 earthquake in Haiti.  220,000 people died in that quake.  People were desperate, homeless, hungry.  It was the perfect set up for relatively wealthy aid workers to buy sex.  Disgusting. From what I understand, Oxfam investigated and allowed the ringleader to resign in exchange for testifying against his peers. It’s unclear to me, but it seems they issued an internal report but not an external one.  The creep went on to work for a French charity and behaved badly there, too.

Depending on the newspaper, this was a cover up or a standard way of addressing a problem that occurs in many, if not all, workplaces that employ men. Sorry, men, but this is on you.

A detail I have not seen reported widely is from a Guardian interview with Oxfam’s chief exec in which he explained, “Had the [French] charity been familiar with British employment law, it would have understood that, when Oxfam would only confirm the employee had worked for them, this wasn’t a reference but an alarm bell.”

Yes.  That’s how it works.  I can only imagine the excruciating tradeoffs Oxfam had to make at that time. Fire the lead perpetrator?  Then we won’t get testimony and be able to root out all of them.  Let him resign, which makes it look like he was unhappy with us—but in exchange we get names and dates and details?

Oxfam has lost access to British government funding and 7,000 sustaining donors cancelled their direct debits in one week.  Friends who work there are stunned and angry.

The only good that could come of this is if all charities “drain the swamp”—if not for ethical reasons then at least to avoid bad publicity.