We slept in, although for me that meant 7:00 am.  I had forgotten to bring milk up to my room so I crept downstairs to the kitchen.  All the doors make that “eeeeeeee…” creaking noise that doors make in scary movies.  When I offered to oil them once, Richard explained that they like the creaking because it tells them when a dog is sneaking in or out where he shouldn’t.

I managed to get into the kitchen without waking the dogs. I fetched milk, turned, and there was dear old Cosmo, lying in his bed in the corner looking at me with his misty bluish-brown eyes.  I walked over and squatted down to talk to him. He briefly moved as though to get up but must have realized I didn’t have food, so he settled back down with his head resting on his paws with his eyes rolled up to look at me.

“Who’s a good boy?  Isn’t it nice and quiet.  No Merry and Pippin to bother you.  Aren’t you the lucky dog.  What a good life.”

He heaved a sigh which rattled his whole body as if to say, “Okay that’s enough,” and I tiptoed back to my room to work until everyone else was up.

Sabrina had booked a pony-riding tour for herself.  Simon was dropping her off, then driving to MacDuff to visit a cemetery and learn more about the Jacobites.  The Star Tribune recently published his article about this.  He and Sabrina were leaving the following day so they packed in two distillery tours after lunch—Glenlivit and Glenfidditch.

Lynn asked if I wanted her to drop me off at Leith Hall on her way to somewhere else.  I didn’t know what it was, but I said yes.  I wanted to do everything.

I got lucky and joined a tour that had just started with a young couple from Germany and a dour, elderly Canadian couple. It was one of those times when I felt like a stereotypical American, with my enthusiastic appreciation of everything, exclaiming, “Wow!” and asking lots of questions.  The guide loved it, but I got the impression the Canadians found me annoying.  The Germans stared at me as Germans do—as if I was a specimen to be studied.

Photos were not allowed inside except in a few locations.  This is Henrietta, or Henny.

She was Northern Irish.  She outlived the laird and their three children. A niece who could have inherited was lesbian, so Henrietta donated the hall to the National Trust in 1945.  It’s interesting that Henny knew her niece was gay, and sad they she disinherited her.  Henny lived in the house until her death 20 years later.  I would love to know what the niece thought about it all.

I had to—had to—have a photo from the taxidermy exhibit.  I fell behind the group pretending to be seriously interested in reading the plaques about boxing squirrels, then whipped out my camera and surreptitiously snapped a pic.

The tour was brief and then we were cut loose to explore the small military exhibit, where photos were allowed.

In generations pre-dating Henny, the younger sons had been sent to Australia or the Americas. One came home with these articles and the dubious claim that the Cree Indians loved him.

This was a standard issue musket given to British soldiers in America.  It was finely carved.  I wondered by whom.  Was it issued this way or did the soldiers have lots of time on their hands to literally whittle away? 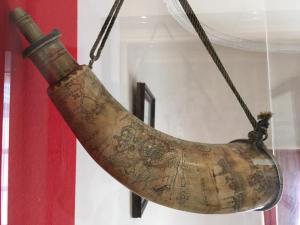 I liked this miniature knick-knack shelf carved by a prisoner of war.

I spent my last £2 on a bottle of water so inspected the tiny gift shop just for fun.  Mostly it was garden-themed items, which was apropos because the gardens were really the highlight of the place. You could wander for hours, and I did. 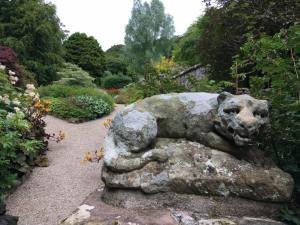 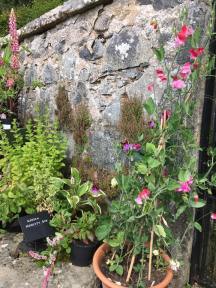 There was a kitchen garden kept by students of nearby Clatt Primary School. 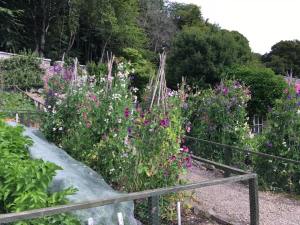 What a downer of a story for a beautiful tree! 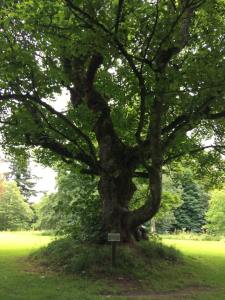 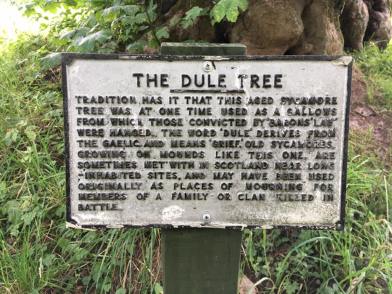 Too late—it was time to meet Lynn—I discovered the walking paths that went for miles through the fields and woods.