Lynn was finding it challenging to communicate with the caterer for the summer party.

“I’d like a paella, like you made at the farmers’ market, and some tapas,” she told him when he came round to discuss the order.

Lynn hadn’t requested a cured ham and really didn’t want a cured ham—especially since it would add £200 to the bill.

“I’ve invited 80 people, but half of them won’t show up, and there are so many vegetarians, and vegans, and you—who don’t eat pork,” she related to me later.

“Did you actually tell him no?” I asked.

“Yes. I think so.  He’s a nice fellow. I think it’s just a language barrier.  I’ll try telling him again, in writing.”

The week flew by, me busy writing about torture, with the attic makeover project, and in helping prepare for the party where possible.  I had found four boxes of children’s party toys, prizes, and art supplies in the attic so brought those down and had them ready to go.  I would be the child whisperer, keeping any little monsters in attendance occupied and out of trouble.

On Saturday, the giant Tesco order arrived.  I loved Tesco when I lived in Oxford. I have hated grocery shopping since I left home at 16, when I had no money or car.  With Tesco, I ordered online, a truck arrived, and two men carried it all in.

The dining room tables were pushed together to make a 15-foot long surface, covered with packages of puff pastry shells, smoked salmon, olives, cream cheese, mozzarella, Gouda, and Stilton; salmon paté, flat breads and party rye and mini rice cakes; tomatoes and fresh basil and dill; strawberries and raspberries and whipping cream; homemade candies from the farmers’ market, and so on.  Kegs of ale had appeared, along with ciders and wines and nonalcoholic bevvies.

“Be ready to form an assembly line in the morning, girls,” Lynn told Gwen and me after dinner.  The men would be busy raking the drive, watching the caterer put up the marquee, and testing the ale.

Promptly after breakfast, Gwen and I carried in food from the dining room, loaded some CDs, and began assembling finger foods.  Salmon paté on flatbread, topped with a cherry tomato and sprig of dill.  Mozarella on a rice cake, topped with a slice of tomato and olive tapenade and basil leaves.  It was fun, it was creative.

This was not the caterer’s food.  This was the “base” on top of which he would contribute tapas and paella and possibly a cured ham.

Suddenly a song I hadn’t heard in decades came on—Looking for the Right One, by Art Garfunkel, and I started to cry.  It’s such a melancholy song, about never finding love. Just when I think I don’t care anymore, wham!—all it takes is one old song.  No one was watching, so I wiped my face and left the room until the song ended.

Marco arrived, and he did indeed bring a cured ham. 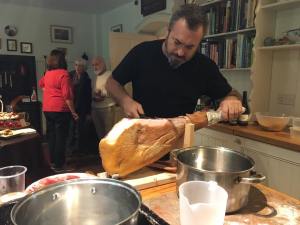 “And I will make Spanish omelets,” he informed Lynn as his wife, who worked steadily all day, carried in and unloaded crates of eggs and sacks of potatoes and onions.

No matter.  He proceeded to take over the kitchen work surfaces on which Lynn was working.

Did I mention he brought his three children? One immediately tangoed with a dog, who bit his hand and drew blood.  I whisked the child away into my bathroom to wash his hand and keep him sweet so no law suit would ensue.  He was a lovely child and I needn’t have worried.  He ran out into the garden to play with the other children. 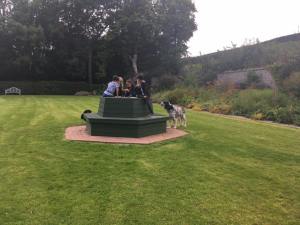 The paella was a hit.

I don’t know how many guests came—maybe 50—but they made a dent in the food and everyone went home with a care package of ham.