We returned to the coffee shop we’d been to the previous day and people watched. 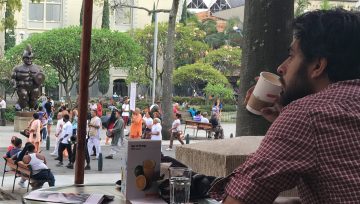 Lynn commented, not for the first time, that the Botero statue of the fat man with a little dick dressed as a gladiator reminded her of a certain president.  “Such a horrid little man,” she said.

This was the second time this day she had used the phrase “horrid little man.”  Over lunch we’d had a long conversation about the Me Too movement and our different experiences.

Lynn’s mum had made it clear to her three daughters that they should put up with no nonsense from anyone.  “Remember, you’re a Rutter!” her mother would admonish them.  Rutter is Lynn’s last name, no relation to the famous composer.

“We didn’t even know what that meant,” Lynn said, “But it had its effect.  When Jan and I were traveling around Europe …” (Jan is her older sister) “… when I was 17, we slept on a hillside in Italy with a bunch of other broke young people who were sleeping rough.

“I woke up in the middle of the night to find a bloke unzipping my sleeping bag.”

“No, I didn’t know him! I yelled at him—‘Get away from me, you horrid little man!’  It just came out of my mouth.  I don’t think any bloke wants to be called ‘little.’”

“He scurried away.  I went back to sleep.  No one bothered me again.”

“I don’t think so,” Lynn replied thoughtfully.  “If they did, I didn’t realize it.”

“Well if you had had any of the experiences I’ve had, there would be no doubt about what was going on,” I replied drily.

I wrote a post last November detailing some of the incidents where men have stalked, groped, exposed themselves, or otherwise sexually harassed me, including at work.

I think, due to my early childhood experiences, I had a big V for “vulnerable” or “victim” stamped on my forehead until just a few years ago.  My mother never told me, “Don’t forget—you’re a Maertz!”  But then, she had been an abused woman herself.

As I write this, a month after this trip, Colombia is in the news because its peace process is in danger of falling apart.  The US is trying to extradite one of the FARC leaders to face cocaine trafficking charges.  The 2016 peace deal promised immunity to FARC leaders, all of whom were wanted in the US, if they quit the drug trade.  The US says that Seuxis Hernandez-Solarte (great name!) has continued in the coke biz. FARC claims the US and Colombia are in cahoots to frame him.

Sigh.  More fat men playing at gladiators. And why was the drug trade so lucrative?  What was the economic incentive?  It was the US demand for drugs. And rather than get people into drug treatment which would have dried up demand, we tried to arrest and incarcerate our way out of the problem.  My son is Exhibit A.  What a waste of lives, money, and time, in both countries.

We had a last supper with Roxana and Ricardo and Gaby at the same restaurant we’d enjoyed the previous night.

The next day we would fly to Santa Marta, on the northern coast.  We would have to make a connection in Bogota.  Someone would pick us up in Santa Marta and drive us to Tayrona National Park.  It became unclear from that point out, but somehow we would then spend an hour traveling on foot or by horse into this park.  It was going to be a long day.

The driver didn’t arrive at the agreed time, 7:30am.  He hadn’t showed by 7:45, so I What’s App’d Responsible Travel.  It was an hour-long drive to the Medellin airport, there was only one route, and we had seen miles of backed up traffic going in the other direction on our way in.  If we didn’t get to the airport it would set off a cascade of missed connections and we didn’t want to know where that would land us tonight.