After our stressed-out rush to get to the airport, we found a line hundreds of passengers deep waiting to check in.  Many had multiple oversized suitcases.

“Maybe the line will move fast,” said Lynn.  She’s such an optimist.  After 15 minutes it hadn’t moved at all.

More than one woman in stiletto heels, sprayed-on makeup, acrylic nails, and wearing 10 pounds of gold jewelry marched up to the desk and demanded to be taken to the head of the line.  They tried lines like, “Do you know who I am?!” and “I have very important business in Bogota!”  The Avianca agent said tiredly, “I’m so sorry madam; you must wait in the line like everyone else.”

Another Avianca agent came along, asking if anyone was there for the 10:30am flight to Bogota.  This is one of those times when knowing some Spanish is really helpful.  I raised my hand, and Lynn and I were led away to the front of the line.  Heh, heh, heh. Or jeh, jeh, jeh as it would be in Español.

We had two hours to kill in Bogota airport, so naturally we reverted to checking on what our friends and family were up to back home via social media.  When traveling in an exotic place, it’s important to keep up with the new Tater Tot hot dish recipe your aunt has tried, the political views of a friend of a friend you talked to for one hour five years ago, and the antics of your ex-coworker’s cat.

I often find the airport network choices amusing. “No me pidas la clave,” means “Don’t ask me for the key.”  Someone is obviously tired of strangers asking, “How do you get on line here?” 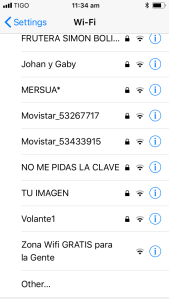 In the four Colombian airports we visited, the wifi networks were straightforward.  Maybe this is, ironically, due to fewer terrorism regulations than in the US and Europe, where—at least the first time—you have to give them you name and email and sometimes your address and phone number, and sometimes create a user name and password, and it still takes forever to actually get access.  So “Zona Wifi GRATIS para la Gente” (Free Wifi Zone for the People) isn’t secure. So what?  It’s not like I do online securities trading at the airport.

“I always find it amusing,” said Lynn, “when I land somewhere I haven’t been in years—like Bangkok—and I am immediately connected to a wireless signal because it remembers me.”

Responsible Travel had messaged several times to check we were on track and apologizing for the morning’s no-show driver.  In retrospect, knowing everything turned out okay, it doesn’t seem that stressful of an occurrence but it was at the time.

“He was clearly unhappy about something when he picked us up in Medellin,” I remarked to Lynn.

“Yes.  Do you think he feels they don’t pay him enough?  To not show up at all is grounds for dismissal, so it’d have to be some pretty serious issue.”

“Maybe he had a heart attack?”

“Or slipped on a banana peel …”

We shrugged and turned back to Facebook.  It was one of those mysteries that happen when you travel that you’ll never get an explanation for and it doesn’t matter, as long as ended well.

We exited the second flight in Santa Marta mid-afternoon, and I couldn’t help sighing happily out loud because it was hot and humid, even inside the airport. You could feel we were near the sea.

Our driver was there to take us on the 1.5-hour drive to Tayrona National Park.  He pulled over after a minutes and a second guy jumped into the truck.  “Mi amigo,” he explained.  Just going along for the ride, apparently. Santa Marta was not particularly scenic, at least along the highway.  It’s a beach holiday destination, so I’m sure it’s much prettier close to the beach.

I realized the driver was talking to me.  “I will keep your suitcases with me this weekend,” he said.  “You can’t take them into the park.”

I translated for Lynn and she looked chagrined.  Our itinerary said, “You can get a horse service for the luggage and for the people for approx. 6 EUR.”