We were joined by a young Spanish woman who was also on her way to the beach.  Even though there was only one path, we didn’t trust ourselves not to get lost.  Our companion—maybe 21 years old—was traveling around Latin America by herself.

“Don’t your parents worry about you?” I asked.

“Of course they do, but they would worry about me if I was in Valencia.  I just don’t tell them where I am, exactly.”

The path split into four or five trails, some leading into the jungle, some splitting around gigantic banyan trees and reconnecting on the other side, others heading in what we presumed was the direction of the ocean.  I tried taking photos of the banyan trees but it was impossible to capture their scale.  This is a section of path that wound through a coconut grove. 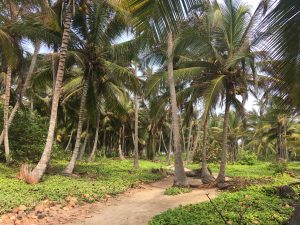 “The first beach is Canaveral,” said our fellow traveler.

“We lived near Cape Canaveral, Florida, in Coconut Beach, when my dad worked for NASA,” I told Lynn.  “In fact when I was three I dug into a hill of fire ants.  My mom heard me screaming.  She had a cleaning lady back then, who was a native and knew what to do, so they filled the bathtub with water, stripped my clothes off, and shoved me in.  They even had to hold my head under water to get the ants out of my ears and nostrils.”

“That sounds terrifying!” Lynn exclaimed.  “I’d take the ants over having my head shoved under water any day!”

We passed a panaderia, or bakery, in the middle of the jungle.  It was really just a cinder-block building with some of those ubiquitous white plastic chairs set outside.  I wondered if the owners were Tayrona Indians.  They were shorter than me, which is short.  Their long black hair was plaited, and they wore what looked like white night gowns.

“Here is where I leave you,” said our friend, “I will buy some sweet bread here for the beach.”

We walked on, passed a hut selling cold beer and snacks, and in five minutes were at the beach.  I had heard that Tayrona’s beaches are the most beautiful on earth.  I haven’t been to enough beaches to judge that, but from our first glimpse Canaveral was wildly beautiful. 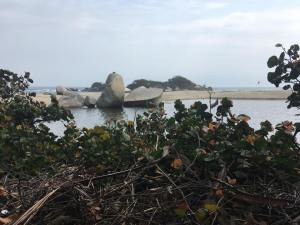 I’m not normally a beach goer; I do things.  I go, go, go when I’m away.  Vacation, for me, is not a break from physical activity but from routine.

Today I would try to do nothing.  I knew Lynn was just going along because it was the thing to do.  She wasn’t a sit-on-the-beach person either.

We were both dripping with sweat, and as soon as we cleared the forest there was a breeze and we both let out an “Aaaahhhh.”  Then, “Oooohhhh,” when we caught sight of the actual beach. 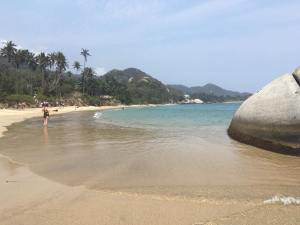 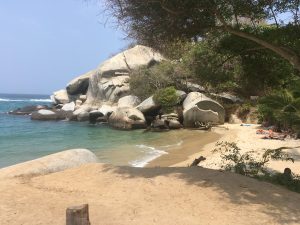 Lynn was wearing her usual long black pants, a black tee-shirt, and black sandals.  Sometimes if she’s in a wild mood she wears a red tee-shirt.

We found a patch of sand and laid down a large towel from our hut. 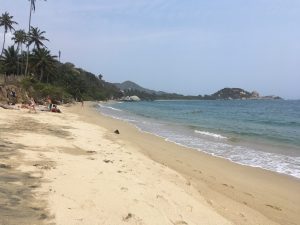 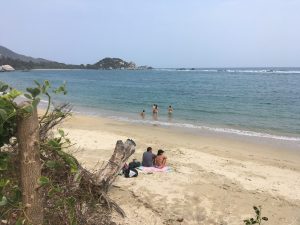 Lynn sat down gingerly. “We used to go to the beach as a family,” she said.  “Mum made these portable changing frocks, like a round table cloth with an elasticized hole in the middle that fit over our heads.  So there we’d be, in full public view, changing out of our clothes into our bathing suits under this contraption.”

“How did you pull your tee-shirt over your head?”

“There weren’t any ‘public conveniences’ in those days?”

“No, just sand and more sand, and wind.  Sand in our sandwiches.  Sand in our shoes, sand in our hair ….”  She was wiping sand off the towel as she spoke.  She clearly did not like sand.

I walked up and down the beach, barefoot in the surf, it was heavenly.

The towel was empty when I came back.  I sat for a few minutes, feeling the sunscreen dripping off with my sweat, then went to join Lynn where I knew she would be—in the shade of the snack hut having a beer.