“I’m not really interested in a four-hour walking tour,” I said as we approached Cartagena after a five-hour drive.

“Me neither,” Lynn replied.  “Maybe we can ask for the guide to cut it down to two.”

We drove along the Caribbean beachfront, lined with tower-block-like hotels. Then we turned into a tunnel in what appeared to be an ancient wall, and we were inside old Cartagena. It immediately felt like we were in another country.  There were a lot more black folks, and as we would learn in a few hours, this was due to Cartagena’s founding as a slave port.  The streets were wide enough for one car, barely.  Residents and tourists thronged in the street and narrow sidewalks, there were carts selling bananas and sweets half in, half out of the street.  Horse-drawn carriages vied with motor vehicles.  There was music in the air—kids with boom boxes, live music wafting out of restaurants.  It had a vibe that reminded me of Havana or New Orleans.

Since our hotel had changed, our driver drove in circles for a while, then stopped and pointed to a street half a block away. “Your hotel is there, but my truck can’t drive there.”  We alighted, thanked and tipped him, then pulled our bags in the direction he’d pointed.

Our hotel was the Don Pedro de Heredia, and it was very nice.  A “restored colonial boutique hotel,” is how it was billed.  Our room was enormous, with two queen-sized beds.  “Why is there only that one tiny window?” I wondered aloud.  The window was high up in the wall and smaller than a microwave oven.

“Because of the heat?” Lynn posited.  Yes, that must have been it.  The room had an air conditioning unit—the kind that hangs on the wall and removes humidity—the first we’d seen in Colombia (although we hadn’t been looking).

As usual, I snooped around to find anything interesting or different about this place.  The toilet paper roll was positioned two inches above the floor. That would make for some interesting gymnastics. 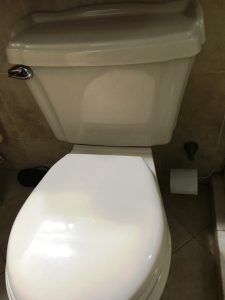 A sign on the back of the door warned against sexual exploitation of minors in tourism.

There was also a No Smoking sign but when I opened the door to go for a wander there were two old geezers sitting in the hall in lounge chairs smoking.  So the Smoking Section was right outside our room. Fortunately none of the smoke seeped inside.

These Mayan faces were set in the wall every five feet.

It was the pool I was really after—as I gazed down at it from the fourth floor balcony I knew I would spend as much time in and near it as possible in our 48 hours here. 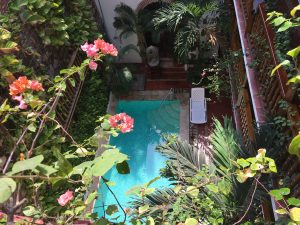 We were down in the lobby at 3:15, where our guide had been waiting.

“But we just arrived …” I felt a bit like a naughty school girl.

We hadn’t eaten since 7am, so we negotiated that our guide, Nora, would return in two hours and cut the tour down to two hours.  She seemed happy with this arrangement.  “It’s a bit less hot at 6 than at 4, but only a bit,” she wagged her finger at us.  “Be sure to wear sun screen and bring water.”  She was younger than us, maybe 40, and tiny as a teenager but had a school marm air about her. “The city comes alive after dark,” she added.

We stepped out into the blinding sun and heat and crowds and held our hands up to shade our eyes as we scanned for the closest restaurant.  The city certainly didn’t seem dead.

“Let’s walk around the block,” I suggested, “so we don’t get lost.”  We found an Italian place and enjoyed a good meal.  Back at the hotel, Lynn napped while I jumped into the pool.  The day had seemed like three days; I could have gone to bed then but as instructed we were in the lobby at 6 sharp.