Colombia has been in the news lately in the US.  Last night there was this story on the PBS News Hour about the election, which is taking place the day this posts.  Near the end, it talks about all the activists who have been threatened—and more than 50 who have been killed—in the ongoing conflict for power.

So I wasn’t overreacting when I worried about our tour guide in Bogota being at risk.  I wrote that Lynn and I would follow him on Facebook and maybe raise a stink if anything happened to him but in reality, what could we really do?  If he suddenly stopped posting, what would we do—call the police in Colombia?  I’m sure they would get a good laugh out of that.  We could contact Human Rights Watch or Amnesty International.  I don’t know.  It’s another thing to worry about, along with all the plastic in the ocean and the violence in Gaza and Russian interference in the US elections.

Just for fun, I made a list of the first three titles of emails I saw in a typical morning at work:

And here is a sampling of my daily dose of funding opportunities from the US government:

That last one is kind of amusing, until you really think about what will happen to the poor mouse.

In one of my daily international news digests this week, there was an article (behind a paywall so I can’t provide a link) about the Colombian government conducting a census of Venezuelan refugees. A few excerpts:

“Exact numbers of people who have arrived are hard to come by and it is difficult to ascertain if people intend to stay in Colombia or move to another country in South America or the Caribbean.

“The lack of accurate data influences the way the United States State Department, U.S. Agency for International Development, and NGOs can plan for and respond to the crisis, a problem the Colombian government hopes the census will help solve. According to [Felipe] Muñoz, there are 30,000 Venezuelan children in the Colombian public school system, and 25,000 in the child care system. Twenty-five thousand Venezuelans have been provided free medical care by Colombia’s public health system.

“The Colombian government also intends to set up a formal process for Colombians who had fled their own country during a decades-long civil war for Venezuela, but now seek to return home. This includes children that have a parent from each country but were born in Venezuela and do not have Colombian identity papers.

‘They have the right to be Colombian,’ Muñoz said.”

We are a country living with an epidemic of fear and hatred.

Lynn and I slept the sleep of the dead after our five-hour drive and two-hour walking tour.

Breakfast was on the rooftop restaurant, which had great views.  That’s the Cathedral in the distance. 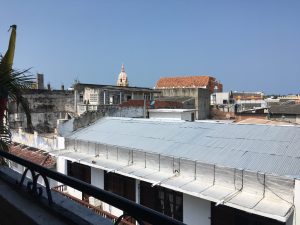 We noted that the hotel had witch points on some of the rooflines.  Nora had told us this was a Colonial-era building requirement by the Catholic Church—to keep witches out of buildings.  I guess it works, because we never saw a witch, inside or out. 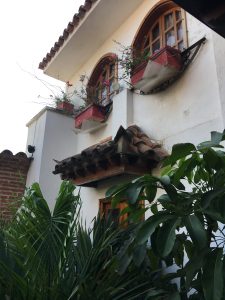 Soon we were out on the street.  Here’s the Cathedral again, in the distance.  Such a beautiful city. 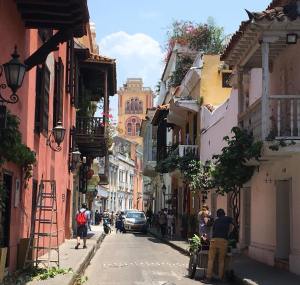 The interior was cool and quiet. 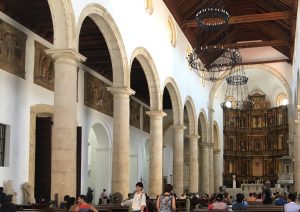 Lynn led us on to Iglesia San Pedro Claver.  St. Peter Claver, as we know him in the US, was a priest from Barcelona, the first saint of the new world, and—so the legend goes—a champion of slaves.