Our tour of San Pedro Claver over, we tipped Charles generously—at least I hope he thought it was generous.  He had clearly poured years of his life into learning everything about St. Peter and his namesake church.

Before we left, he scribbled on some scraps of paper and handed them to us along with some business cards.  The business cards were for his cousin’s store, which sells Handy Crafts.

“My cousin, Fabiola, you can tell her I sent you to get a discount.”  The scrap of paper had his contact details on it.  If you ever go to Cartagena and want a personal tour of St. Peter Claver Church, ask for Charles, aka Carlos Arturo Pelaez Martinez, and tell him Anne sent you and you want your discount. 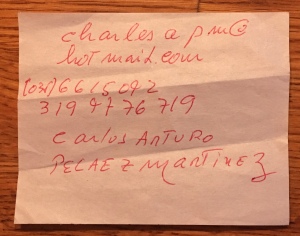 We wandered out into the blinding, blistering hot sun.  In the square, this woman was posing for tourists with a bowl of fruit on her head.  I really hate things like this, but I took a photo and gave her 10,000 pesos.  It felt a bit like I was photographing a zoo animal.  The irony of us being in the former Black Market wasn’t lost on me.  Did her costume have any cultural significance?  She wasn’t interested in talking.  She needed to sell as many photos as she could, literally—Snap Snap!—to make a living.  I guess it was better than working in a factory. 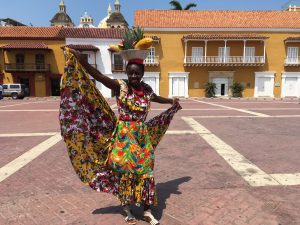 Lynn and I always try to hit a grocery store when we travel. In Colombia, we were fixated on buying some of the crunchy corn kernels—sold in the US as Corn Nuts—which we’d had on salads and in ceviche and soups here.

I don’t know which is more disturbing.  The thought of wiping myself with a white rabbit or that “Exito” means “success.”  An interesting name for toilet paper.

This ranks up with the “Colonial” brand cigarettes I saw in Belize.  I mean really—what was the thinking on the marketing team when they came up with the brand name Dictator for a Latin American rum?  “I’m telling you Jorge, dictators are hot.”  Note that in one photo the man is dressed in a suit with a George Michael beard and in the other he is shirtless and clean shaven.

We found our corn nuts and went to find lunch.

It seems like it’s hard to go wrong in the search for good food in Colombia, especially if you enjoy seafood.  We found a ceviche restaurant and settled in.  There was no point in rushing around the city in this heat.

Being a plant lover, I appreciated that plants, vines, and flower arrangements were incorporated into the décor everywhere in Colombia.

The ceviche didn’t disappoint, although I thought half a pita and Saltine crackers were interesting choices for accompaniments.  I associate Saltines with being broke or nauseous.

The sign on the ladies’ room door.  Again with the fruit hat.  If a restaurant in Minneapolis used this sign, there would be protests that it was racist or at the very least, a case of cultural appropriation.  But this restaurant was owned and operated by Black Caribbeans, so there. 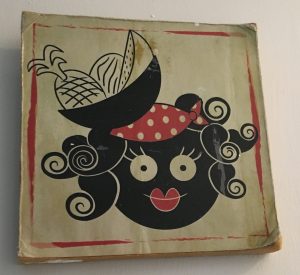 After lunch we returned to the hotel and I headed straight for the pool.  If you’re not a water person, you don’t understand the pure bliss of being in water in the sunshine, surrounded by plants and two very noisy parakeets in a big cage.  I don’t really even know how to swim but I can splash around in a pool for hours.  I ordered a print of this photo and keep it on my desk at work.  I escape here when I need to. 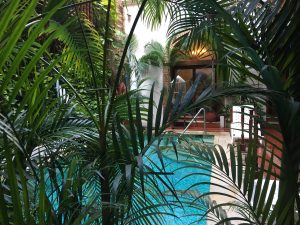 Our last evening in Colombia.  Nora had suggested only one thing—Getsemani—a bohemian neighborhood.

“It looks like all we have to do is cross a street,” I said to Lynn as I consulted the map.

But we got clever and left a trail of bread crumbs in the form of photos.

From one side of the clock tower to the other, dusk fell that fast.  With any luck it would be lit up after dark, right?