Meg drove around to the other side of the rock and we disembarked again.

“After a little talk ‘n’ walk with an aboriginal guide, we’ll visit the cultural centre and then head out to our next camp for the night,” she explained.

“Cultural center …” I said to Heidi, “I wonder if it’s the same one we were at yesterday?  I could buy those pillow cases?”

We were invited to sit in a circle on the ground by a young white woman who introduced herself as Donna.  I wasn’t sure I’d be able to get up again, so I remained standing.  I can hike, bike, or swim for hours but I have a hard time getting up off the ground due to my scoliosis.

“This is Bessie,” Donna said, introducing the woman next to her wearing a t-shirt that said:

I used to think I would do something important with my life, but I kept getting distracted by Sparkly Things.

The work sparkly was, of course, bedazzled with glitter. 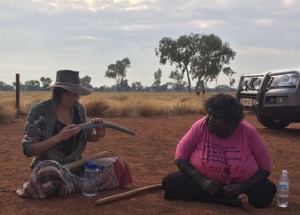 “Bessie is our local guide,” explained Donna.  “She lives in the nearby community.”

Community, I learned, referred specifically to Aboriginal settlements.  I had heard something about some indigenous people somewhere not liking their photos taken, but Donna said to go ahead and snap away.

“I’m a PhD candidate in Aboriginal Culture at [some university],” continued Donna.  “And I’ll be translating for Bessie.”

She said a few words in what I assumed was Pitjantjatjara, the local language.  Bessie said about four words in response.  Then Donna translated, “Bessie says ….” and talked for 10 minutes.  Who knows, maybe Pitjantjatjara packs a lot of meaning into every word.

This was repeated; Bessie didn’t seem into it, or maybe she was just tired, or maybe Aboriginal Australians also wear the dead-pan expression common to Native Americans.  She would force out four or five words and Donna would wax on about various customs and objects which she passed around, including a boomerang.

“Contrary to popular belief, most boomerangs are not designed to return to the thrower.  They are designed to break the legs of an animal like a kangaroo, and you wouldn’t want that coming back to you!”

It went on for some time and I felt self-conscious about standing.  If Bessie could get up again I should be able to.  So I sat, and then Donna said, “Now we’re going to walk over to those caves and Bessie is going to tell us about the paintings.”

Heidi helped me up and we walked a short distance.  The paintings were beautiful.  They told stories using symbols for things like people, emus, and the sun. 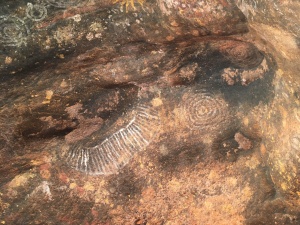 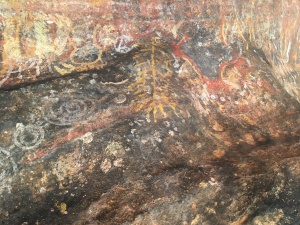 I had expected to learn something about the Dreamtime and creation stories, but as I wrote previously, most of them are sacred and not shared with outsiders.

The Cultural Centre was a different one from the one we’d already visited.  It was a circle of shops and workshops and a café around an open plaza.

“There’s a museum-like thing if you can find it,” bawled Meg as we jumped off the bus.  “The café is super slow so get in line now if you want a cuppa!  You’ve got one hour!”

Heidi and I got in line and took turns keeping our place.  It took 50 minutes to get two coffees.

The gift shop was extremely expensive; I was relieved not to see “my” pillow cases.  There was a workshop where Aboriginal women sat on the ground painting while tourists watched.  I realize it is the Aboriginal way, to sit on the ground, but I felt very uncomfortable, like I was watching animals in a zoo.

There were signs everywhere that said No Photos.  I think they are trying to prevent people from taking photos of the paintings and then just printing them out without paying for the labor that went into them, which is substantial.

Meg had been right, the museum was hard to find and once we did find it we had only 10 minutes left.  I would have skipped the coffee and the shop for an hour here but it was too late.

Back on the bus!