Heidi and I would drive Auntie Margaret’s car to Blayney, a three—or five-hour—drive depending on the route.  Well, Heidi did all the driving, and thank goodness.  Someday I will overcome my phobia of driving on the left side of the road.  It’s on my bucket list.

Then there were the—presumably—Aboriginal names, like Paramatta, Winmalee, Berambing, Megalong, and Yaramundi.   We stopped in Kurrajong for a cup of coffee, then entered the Blue Mountains.

“If you roll down your window you can hear the Bell birds,” Heidi suggested.  Yes, Auntie Margaret’s car still has crank windows.  The bells echoed near and far in the forest of Blue Gum trees.  I would love to return some day and hike through to hear the bells without wind rushing by.

When I look at the map now, I’m amazed again by the distances.  There were no straight roads, so it didn’t pay to be in a hurry. Our next stop was Katoomba.  The main street was lined with head shops and cafes serving alfalfa sprout sandwiches but most everything was closed because it was late afternoon in the off season.

“Oh, sorry, our toilet is out of order,” said the owner of the one restaurant that was open.  “The public toilet is just down the block,” and he provided complex directions. Thankfully I had not been hydrating.  Heidi braved it, “And it was pretty much as bad as you would expect,” she reported.

There was a church across the street with a tree out front covered in knitting. 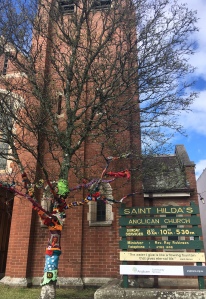 I think Katoomba is probably a funky, fun town to visit in the high season.

Just outside of Katoomba was the reason we were there, the Three Sisters overlook.  My first stop was the toilet, and it made me wonder just who my fellow visitors would be.

The Three Sisters is a geological formation overlooking a vast valley.

“Can you imagine?” I commented to Heidi. “The first Europeans crossing that valley?  It reminds me of the great north woods in Minnesota, where the Voyageurs came down through what’s now Canada, portaging their massive canoes, being eaten alive by mosquitoes. And they were just teenagers, basically, from poor farms in France and England and Ireland.”

“Yes,” Heidi replied.  “I think it was pretty much the same story here, except with lots of poisonous snakes and spiders and plants.”

We took a short walk and the lowering sun threw luscious light on the gums and golden rock face.

We checked out another lookout, where a ranger who looked like Rip Van Winkle was being peppered with questions from visitors about the rocks, birds, and animals.  Most of the visitors were teens or 20-somethings from other counties and many were trying to get the perfect Instagram but they were also curious.  I know I will sound condescending when I say I found this heartening.

We drove on and took another scenic hike.  This turned out to be my favorite because the light made it all eerily beautiful.  There were these giant tulip-like flowers. 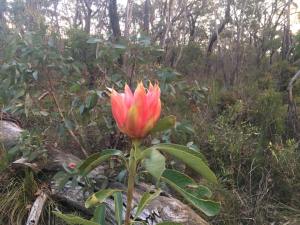 And these tiny ones. 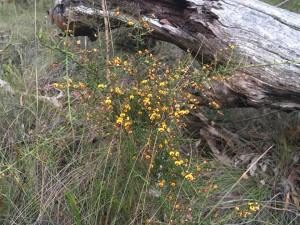 “And I think these are Scribbly Gums,” Heidi pointed out a funny-looking tree that resembled an old man with scribbles on his skin.

We turned a corner in the path and came upon a woman sitting on a bench. She was wearing sunglasses, and a parka with the hood pulled up around her face.

“Do you know how far the lookout is?” Heidi inquired.

We walked a few more yards, then turned back because it was getting too dark.  The woman was gone, and we never passed her even though we were hoofing it to keep warm.

One more stop in the Blue Mountains: The Hydro Majestic Hotel and Ballroom. 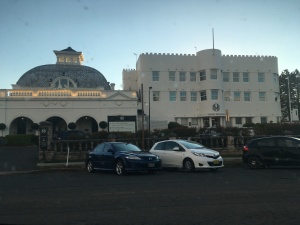 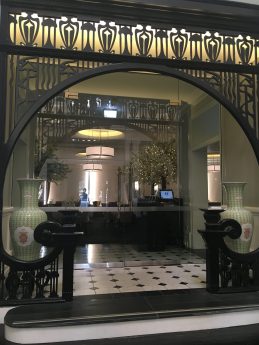 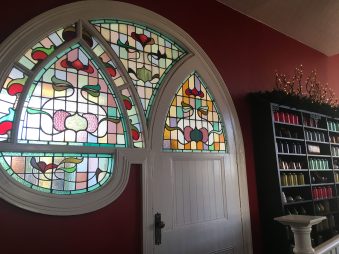 Next time, I would stay the night.  We were tired and I worried about Heidi driving another two hours in the dark.