I’m not a food snob.  I cook a lot but nothing fancy, and I enjoy whatever is put in front of me when I go out to eat.  Our meal at the Independent was memorable because the food was so flavorful.  We had scallop ceviche, maple-smoked carrots with coriander and peanuts and chili, crispy chicken with smoked eggplant, and on and on.  We had drinks and desserts and coffee and aperitifs. Being a tapas restaurant, we ordered a dozen dishes for the four of us, and I could hear a little “cha-ching” in my head with each plate we added.  This was a special meal, with friends I might not see again for a long time.  When we split the bill we each paid $60Aus, or $42US, for an amazing meal with great company.

On the subject of drinks, when ordering beer in Australia you must know the difference between schooners, pots, and pints. A pint is a pint—20 ounces—except in Adelaide where it’s an Imperial Pint.  A schooner is 15 ounces except in Adelaide, where it’s a pint. A 10 ounce glass of beer is a pot—not a half pint—except, apparently, in Canberra, where it may be called a middy.  Apparently you can order a seven-ounce glass of beer called (creatively) a glass or a five- (or four-) ounce glass called a pony depending on where you are.  There are also shetlands, middys, handles, butchers, bobbies, foursies, and small beers.  I ordered a local craft brew in a schooner because I liked the sound of it and hoped for the best.  It was good, but the waitress swooped it away before I’d finished.

The next day we were old hands at taking the train and got up early to get a move on.

We boarded a cruise ship on the Yarra River in downtown Melbourne and sat back to enjoy the scenery and listen to our captain, who was also a comedian.  I won’t attempt to reproduce his banter here but he really was clever, assuming you like jokes about drowning.  He had clearly made an effort to make what would otherwise be a boring job into something entertaining for himself and his passengers.

Melbourne is a deep-water port.  I write that as if I know what it means.  There were gigantic cranes everywhere; we didn’t see them in action but I guess they load and unload containers onto ships so we can all have our plastic pens and clothes and storage bins that will all end up in the Great Pacific Plastic Island some day. 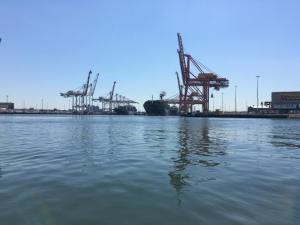 There was an interesting assortment of architecture and many more cranes building new buildings in which more people can keep more plastic items.

There was a fabulous Aboriginal statue that served as a nonlinear counterpoint to the buildings.

What does that say about me?

About 80 Japanese businessmen boarded.  They dashed around taking photos of every building and paid no attention to the commentary.

This building came with a long background story where every feature symbolized the Eureka Rebellion in nearby Ballarat.  I believe this was like the American Tea Party, except it was gold miners rebelling against the British over taxation without representation. 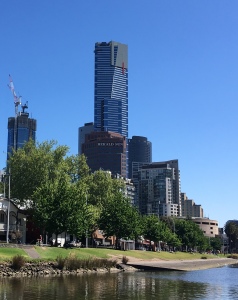 This bridge was unremarkable until the captain informed us that the pylons are one meter higher than Sydney Harbor Bridge.  That was the whole point of the bridge, besides getting cars from Point A to Point B.  They were not out to build a beautiful bridge, just one tall enough to best Sydney. 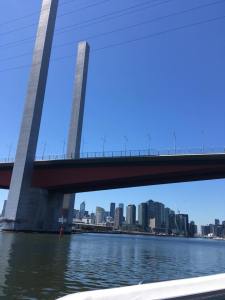 Melbournians are mad about sport.  We passed Melbourne Cricket Ground, and this is Marvel Stadium, formerly Emirates Stadium.  Maybe next year it will be Amazon Stadium.

“Those low-rises on your left,” intoned the captain, “are condos that’ll sell for $7 million once their finished.  Each one comes with its own private yacht berth.”

“Crikey!” he said next.  “I just got a Google alert that the Dow Jones fell 800 points today.”  This was not in the script, and he sounded genuinely alarmed.  “Good thing I didn’t invest in one of those condos.  It might only be worth $4 million now.”